We all know the formula: big engine plus small car equals loads of fun. It’s a combination as old as hot rodding itself. No surprise then, that the formula is still in use today, with modern builds pushing the limits to all-new levels of lunacy. This engine-swapped Mini Cooper is a perfect example of that, as it sports an absolutely monstrous LS engine up front topped by a behemoth supercharger good for 600 ponies.

The car in question is a 1977 Austin Mini, which means it’s a truly tiny automobile. However, despite the car’s diminutive size, it’s powered by a blown 4.8L Small Block LS V8 plucked from a Chevette drag car, which comes with a big cam and a host of supporting mods. The LS engine runs on ethanol, and because the car is so tiny, the radiator is mounted underneath the body. A three-speed automatic transmission sends output to the rear wheels. “We got in this joke with my buddies that we were gonna put an LS in a golf cart to just cruise around LS Fest,” explains the owner, “and then I kinda decided, I was like ‘Well why don’t we do something bigger?’”

Speaking of bigger, at six-foot, seven-inches tall, the owner is a big dude, which makes seeing him crammed behind the wheel of this insane LS engine swap even more entertaining. The Cooper itself is rough-looking, with chips in the paint and rust showing. This ain’t no show queen, but there’s still all kinds of fun little details. For example, the blower air can is a plastic mailbox, giving it that perfect home-built vibe. On the back of the mailbox, the owner hand-wrote himself the following message: “You don’t have to drive this home. Send it!”

And because it’s an old-school Mini, rather than the modern BMW-produced alternatives of today, the car weighs just 1,500 pounds. Sounds like a good match for 600 ponies, no?

With so much power stuffed into such a tiny little car, the LS engine swap Mini absolutely shreds rubber, whipping around maniacally as the driver keeps his foot pinned to the floor. It’s a helluva sight. 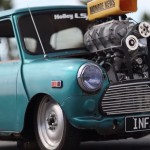 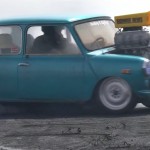 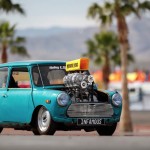 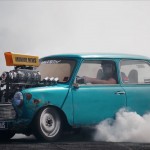 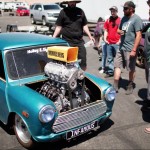 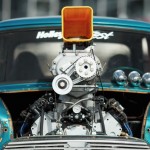 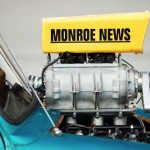 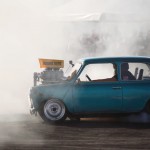 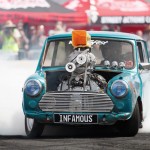 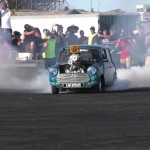 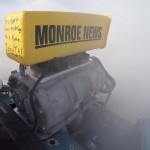 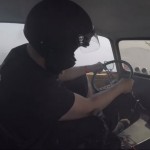 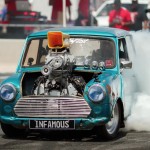 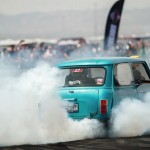 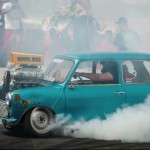 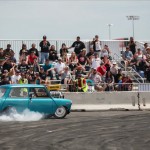