For the past week or so, Chevrolet has been at the famed Nürburgring track putting the new 2020 Corvette C8 through its paces. In addition to providing the Bow Tie brand with critical test sessions at the track, the time spent at the ‘Ring have also provided our spy photographers with a chance to capture the camouflaged mid-engine Corvette prior to its big debut this Thursday in Southern California. As such, something interesting caught our eye earlier on Monday: a Corvette C8 with what appears to be a Z51 performance package!

While we’ve always known the new Corvette C8 would offer a full range of performance packages and go-faster models/trim levels, this is the first time we’ve captured photographic evidence of such. Apparently, Chevy had no less than six examples of the Corvette C8 at the ‘Ring, and lucky enough for us, we managed to snag a shot of two of the models with differing exterior specs side-by-side. Zooming in, we also notice that the brake calipers, with the standard C8 Stingray equipped with black calipers, while the C8 Stingray Z51 red calipers. In fact, the Z51 might get larger rotors, but we can’t tell from this angle. That said, we would expect the rotor differences to be at the front, rather than at the rear, but we don’t have a clear angle to do a side-by-side comparison. All this definitely falls in line with our expectations for the optional Corvette C8 Stingray Z51 performance package. Of course, the rest of the package details are still under wraps, but to provide additional clues as to what it may contain, here are the current Corvette C7 Stingray Z51 package contents: 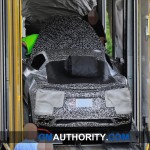 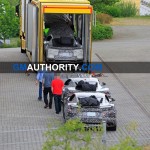 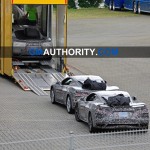 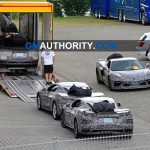 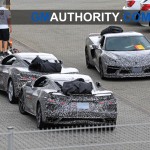 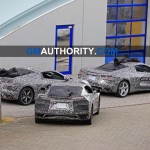 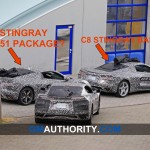 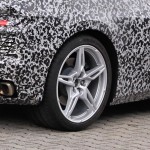 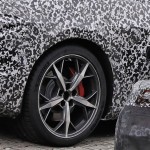