The 455 Super Duty engine option for the Pontiac Trans Am was a lot like General Motors’ modern-day LT4 or LT5 supercharged engines are today – it was only really ordered by those who are serious about performance.

This 1973 Pontiac Trans Am Super Duty is one of the earliest known examples of the rather rare breed. It’s certainly the first real production car, laying claim to the first Trans Am Super Duty VIN; however, GM likely developed and built a number of pre-production cars before this one that may still be out there somewhere today, so we’re sticking with “earliest known.”

Not only is this car the first production Pontiac Trans Am Super Duty, but it is also wearing Brewster Green exterior paint and features a saddle leather interior – a color combination that was offered for just one model year. It is also fairly well-optioned, featuring factory air conditioning, an automatic transmission, the ‘Formula’ steering wheel, a tachometer, power windows, AM/FM radio with 8-track, rear spoiler and the desirable ‘Honeycomb’ wheels.

The centerpiece of this car is, of course, the 455SD engine, which featured a heavy-duty block, forged pistons and rods, a special performance crankshaft, high-flow round port cylinder heads, and high flow intake and exhaust manifolds, among other go-fast parts. As the listing says, the Rochester Quadrajet carburetor topped the package off and helped deliver a factory output of 290 horsepower and 395 lb-ft of torque, making the Trans Am Super Duty one of the fastest American production cars at the time. 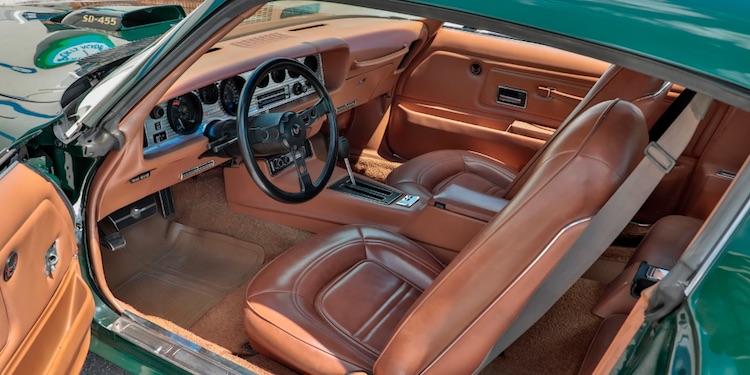 According to the listing, this Pontiac Trans Am Super Duty is also sold with extensive receipts, the original owner’s manual and the maintenance schedule. Mecum is expecting it to fetch anywhere between $100,000 to $150,00 when it crosses the auction block at its Harrisburg, Pennsylvania auction later this month.

Check out the listing here for additional information and photos.