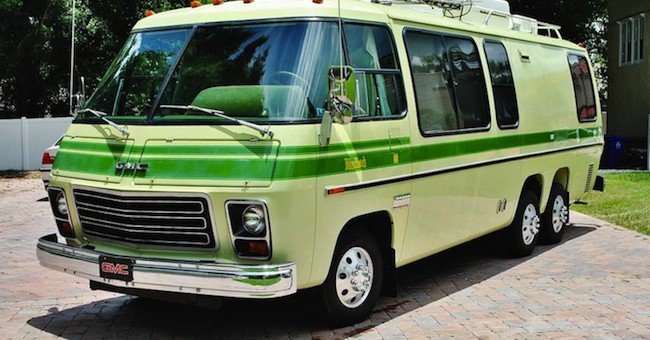 There was a time when GM was the automotive innovator. For a while, The General was the trendsetter when it came to transportation. During that golden era, GM knew what buyers wanted before they knew they wanted it. Vehicles such as the Chevrolet Corvette and the Pontiac GTO were perfect examples. And among the plethora of product-focused creations GM brought to the table during its high time was the GMC MotorHome.

Introduced to an ad with the catchy slogan, “It doesn’t ride like a truck, it doesn’t look like a box,” the GMC MotorHome set itself apart from conventional RVs thanks to its futuristic streamlined design resting on its own bespoke aluminum-intensive architecture. It was also a mechanical tour de force, using not-before seen features such as a side-by-side rear wheel setup with air suspension, which gave the MotorHome unparalleled ride quality compared to the conventional dually configuration.

The GMC MotorHome was powered by an Oldsmobile 455 cubic-inch V8, taken directly from the front-wheel-drive Toronado. As a result, all of the MotorHome’s mechanical components rested over the front wheels, meaning it left plenty of space for interior space packaging, a vital element for RVs. During six years of production, more than 12,000 GMC MotorHomes were built, making it a successful and profitable vehicle for GM.

So why did GM cancel it? At the time, GM bean counters figured there was more money to be made building trucks than recreational vehicles. Meanwhile, the GMC MotorHome was brought to life when gas prices were quite high. Either way, the decision to drop it seems rather short-sighted, as the market for RVs boomed throughout the ’80s and ’90s.

The video below delivers a fairly extensive overview of the GMC MotorHome, making us lust for the days of yore.

Heck, we’d even wager The General would most probably own the RV market by now if it had continued making the GMC MotorHome, potentially adding a Chevrolet variant to boot. Imagine that.