A red C4 Corvette went flying into a backyard in British Columbia this week, causing quite a stir in a typically quiet Canadian suburb.

According to local publication Langley Advanced Times, the 51-year old female driver of the Corvette tried to pass a vehicle on the right hand side of the road in a bike line. The Corvette then narrowly missed a light pole before it went off the road, hit a brick and metal barrier and went flying into the backyard of a nearby home. 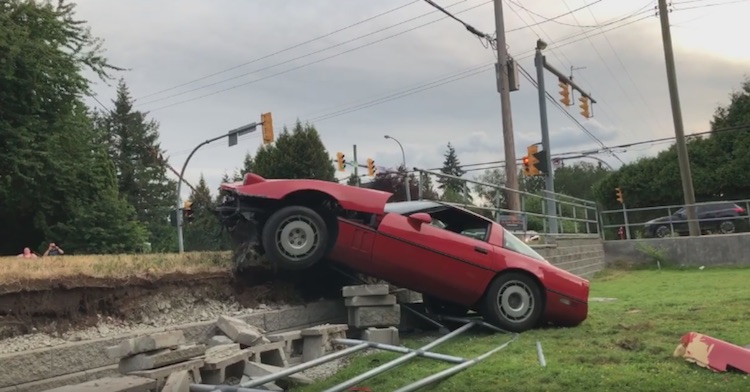 Austin Fadear was watching television in the home with his father when the red C4 Corvette crashed onto their property.

“It was the loudest noise my dad and I ever heard,” Fadear told Langley Advance Times. “At first, I thought it was the subwoofer. We have surround sound.”

They quickly realized the sound din’t come from the TV, though. When they went into the backyard to investigate, they were greeted by the site of the trashed red coupe. Debris from the metal and brick barrier that separated the yard from the road was also scattered about.

The Fadear family was thankful for the barrier, as the car may have otherwise hit the rear of one of the houses situated along the road.

“If that wall hadn’t been there, it would have been terrible,” Fadear added. “We’re both shaken up.”

Surprisingly, the driver was not hurt in the accident. It sounds as though she was drunk or under the influence, with local Royal Canadian Mounted Police issuing her an immediate roadside prohibition for impaired driving and impounding the (now wrecked) C4 Corvette for 30 days.