Corvette Racing driver Marcel Fassler was thankful for the team’s devotion to safety after the No. 64 Corvette C7.R was punted off the track by a GTE Am Porsche 911 during the 24 Hours of Le Mans and impacted the outside barrier hard at the Porsche Curves.

Fassler was hit on the right rear by the No. 88 Dempsey Proton Racing Porsche 911 RSR whilst trying to make a pass on the inside of Am driver Satoshi Hoshino. This sent the No. 64 Corvette darting toward the outside wall, which Fassler hit head on before the car spun and impacted the barrier a second time with its left rear. 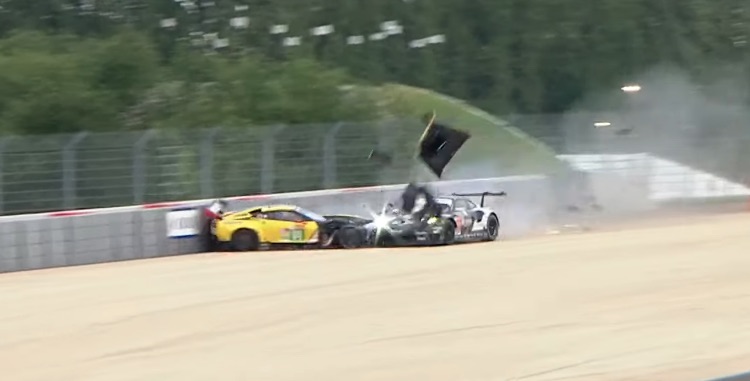 “It was a tough weekend for us,” Fassler told Sportscar 365 post-race. “It definitely was not what we were hoping for. It was an early end to our day.”

“Unfortunately I got hit by a GTE Am driver that took me out and I hit the barrier quite hard,” he added.

“For us the race was over. I’m happy Corvette is the safest GT car we have in the field. Every system worked well and I have no issues. Feeling well even though the impact was hard.”

With Fassler now confirmed as being in good health, Corvette Racing turns their attention to their severely damaged C7.R chassis. The extent of the damage to the car was not immediately clear when the team spoke to Sportscar 365, but if it’s a write-off, it has a backup chassis to dust off for the upcoming IMSA 6 Hours of The Glen at the end of the month.

The No. 63 Corvette also hit the wall late in this year’s running of the 24 Hours of Le Mans after Jan Magnussen spun off while pushing hard on cold tyres. The veteran racing driver was forced to pit for suspension repairs, putting it out of contention of a likely podium. It suffered much less damage than the No. 64, however.