A Chevrolet and Toyota dealership in Jefferson City, Missouri, was hit by a serious tornado this week, damaging hundreds of the cars, trucks and SUVs on the lot.

According to local outlet KSHB Kansas City, the major tornado that passed through the Jefferson City region Wednesday night damaged or destroyed more than 500 cars at the Riley Chevrolet and Toyota dealership. There may have been as many as 750 cars on the lot at the time of the tornado, the dealer alleges.

The storm picked up cars from the lot and tossed them hundreds of feet and also completely wiped out parts of the dealership building.

“I just can’t believe it,” said general manager at Riley Chevrolet and Toyota, Jay Schnieders. “They were tossed around like toys.” 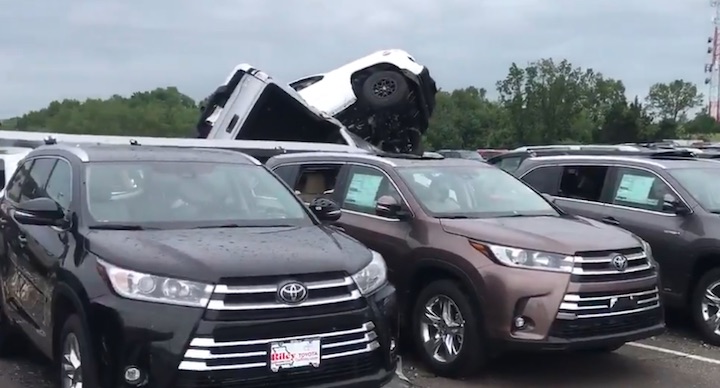 The Missouri tornado carried peak wind speeds of around 160 mph and ravaged parts of the state this week, leaving three dead and sending more than 20 to hospital.

In a Facebook post this morning, the dealership said it “will be closed to all public and employees until further notice.”

A Facebook live video posted by local radio station 93.9 The Eagle showed more of the damage at the dealership, including Chevy and Toyota trucks piled on top of each other and a Chevrolet service building that had been completely destroyed. The Chevrolet building on the dealer lot was apparently more heavily damaged than the Toyota building.

The co-owner of the dealership said they plan to repair and rebuild from the damages and “move forward,” from the setback. The dealer is currently waiting on an insurance company to come out and assess the damages from the cars and the buildings. Power and utilities have not yet been restored to the dealership.