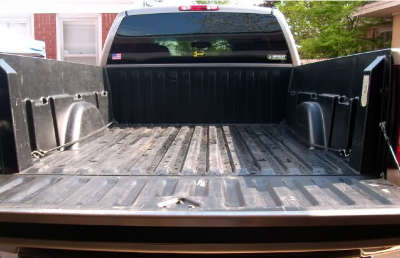 The GMC CarbonPro carbon composite bed may be the hottest thing in the land of pickup trucks today, but it’s certainly not new to General Motors. In fact, some may remember that, just after the dawn of the 21st century, GM introduced the Pro-Tec composite box on the Chevrolet Silverado pickups. Billed as a game-changing product that could change the way pickup trucks were built, the Pro-Tec box was a great idea, but it died just two years later.

The GM Pro-Tec box was available exclusively in a short bed length and had the benefit of being lighter, resistant to rusting and denting (from both inside and outside), and probably would be much cheaper to build in the long run. A total of $64 million were invested into the GM Fort Wayne plant in Indiana to build the Silverado 1500 with the new Pro-Tec box, which was then sold as an $850 option. However, that $64 million wasn’t likely an all-in investment from GM, but rather a trial run to explore producing composite pickup boxes en masse, which is probably the reason Pro-Tec was only offered in a single length.

And that’s where the problems started. GM did not market Pro-Tec whatsoever, placing the responsibility of selling the Pro-Tec box to customers on dealerships, which had to take a chance on ordering a Pro-Tec-equipped Silverado despite little consumer interest and demand. GM projected 50,000 sales in the first year, but only about 10,000 units of the box were sold during its entire production run spanning two model years before being discontinued. Now, almost two decades later, GM is giving composite pickup boxes another go with CarbonPro. Unlike Pro-Tec, the new CarbonPro is a carbon fiber composite (as opposed to a plastic composite) and it will be available on the GMC Sierra, rather on the Chevy Silverado, at least initially. Here’s to hoping that GM has learned from the Pro-Tec mishaps, and markets CarbonPro in the same aggressive fashion that it’s advertising the MultiPro tailgate.