Corvette Racing is currently in its 21st year of operation and driver Oliver Gavin has been present for almost all of them, with the Briton having been on the team’s roster for 18 (!!!) consecutive seasons.

Gavin has made good use of those 18 years, taking 50 wins in total across the multiple series Corvette Racing has competed in (including five at the 24 Hours of Le Mans) and winning four American Le Mans Series championships and one IMSA championship. 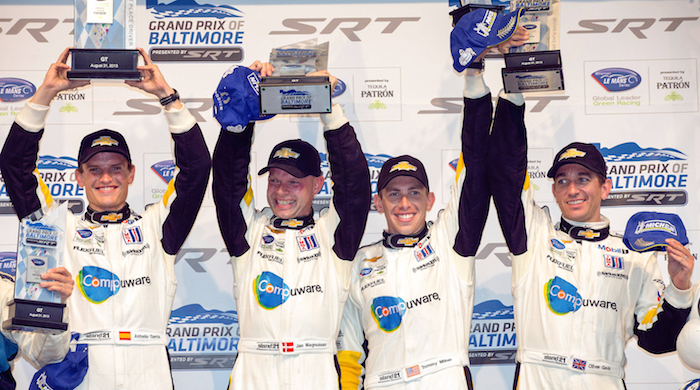 Gavin, Milner, Magnussen And Antonio Garcia take a 1-2 finish at the 2012 Baltimore GP

Today the 46-year-old Gavin shares the No. 4 Corvette C7.R with his younger teammate Tommy Milner. In a recent video by Mobil 1’s The Grid documenting Gavin’s career, Milner said being partnered with Gavin when he first joined Corvette Racing in 2011 was one of the best things that has ever happened to him. Milner was young and still learning the ropes of top-level sports car racing and Gavin, who even back then had a great wealth of racing experience, was able to rub off on him in a positive way.

Gavin has now driven every single generation of the factory-built Corvette race car, from the C5-R to both the GT1 and GT2 versions of the C6.R and the current GTE-spec C7.R. You can bet that his feedback will be crucial in developing the new mid-engine Corvette C8.R, then, which was first filmed putting in laps under the cover of darkness late last year. The C8.R will debut in time for the 2020 Rolex 24 at Daytona in January, where Gavin will be looking to add another Rolex to his collection.

For now, you can watch Mobile 1 The Grid’s short documentary on Gavin embedded above.