Team Penske and Simon Pagenaud raced to an unforgettable victory in the 103rd running of the Indy 500 Sunday, with the Frenchman outdueling Andretti Autosport’s Alexander Rossi to become the first Frenchman to win the ‘Greatest Spectacle in Racing’ in just under a century.

Pagenaud started from pole in his bright yellow Menards-sponsored Chevrolet and led a race-high 116 of 200 laps en route to his first-ever Indy 500 victory. With a beautifully handling car and the power of his Chevy engine giving him a slight advantage over the hard-pressing Honda of Rossi, he was able to fend off the American in his last lap attempt for the lead and take the checkered flag by just 0.2086 of a second.

“I drove really spirited today, but it’s just incredible,” Pagenaud said post-race. “I can’t take all the credit because I think it showed I had the best car out there.”

“The car was just on rails; the yellows came out perfectly. The stars are aligned. It’s pretty amazing.”

The caution period Pagenaud is referencing came out on lap 177 – just as his Team Penske crew was telling him to slow down in order to meet their fuel window. Team RLL’s Graham Rahal tried to pass Dale Coyne’s Sebastien Bourdais on the inside when the two came together, collecting four other cars (Scott Dixon, Felix Rosenqvist, Charlie Kimball and Zach Veach) and eventually bringing out the red flag. 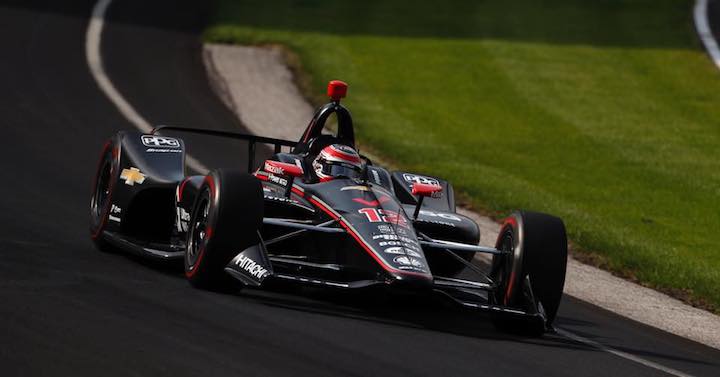 Racing resumed on Lap 187, with Rossi starting first and Pagenaud in second. The two battled for the lead in the remaining laps while the Team RLL Honda of Takuma Sato stalked them in third – with the 2017 Indy 500 winner making a surprising late race charge. Pagenaud took the lead for good into turn three on the second last lap, putting on an unforgettable display of driving talent as he broke the draft down the back straight to hold off a red-misted Rossi.

“Simon wasn’t going to be beat today,” team owner Roger Penske said. “He raced clean, and that’s what I have to say about Rossi also. The two of them for the laps that they ran side by side was as good of racing as you’ve ever seen here.”

Check out the highlights from the 103rd running of the Indy 500 above and click here for the final box score.