Back in the heyday of the muscle car era, Baldwin Motion was the go-to destination for superlative Chevrolet performance in the Long Island area, offering custom dealership muscle car builds in the same vein as Yenko and Royal Pontiac. The Baldwin Motion matchup created some truly over-the-top speed machines, delivering professionally-upgraded muscle cars capable of terrorizing both the track and the street.

From modified cruisers to full-fledged race-ready barnburners, Baldwin Motion’s specialty was anything with a Bow Tie. Customers would buy the car from Baldwin Chevrolet in Baldwin, New York, after which the vehicle was sent directly across town to Joel Rosen at Motion Performance for upgrades. Some folks went all-out, skirting the line between street-legal muscle car and fire-breathing drag strip dominator. Baldwin Motion would even occasionally offer a money-back-guaranteed quarter-mile time. Let’s get to the most important bits right away. When new, this muscle machine was guaranteed to run the quarter mile in 11 seconds flat, or better. Making that figure possible is an upgraded 7.4L (454 cubic-inch) V8 engine, which received Baldwin Motion’s “Phase III” treatment. Putting down about 475 horsepower, the output is sent to the rear axle by way of a “manual-shift” TurboHydro 400 transmission, where it hooks up to 4.10 gearing. The exterior is also extensively upgraded and includes an L88 hood, a large rear spoiler, and custom American wheels. A Phase III white and orange paint scheme was added to the body panels, while enormous rear tires give it a raked, hyper-aggressive stance. Inside, there’s a removable four-point roll cage, and the upholstery is finished in black, with black leather seating.

All told, we think this 1973 Camaro looks like a riot to drive, and we’re sure just about any old-school Chevy fan would love to park it in their garage. This Baldwin Motion 1973 Chevrolet Camaro will soon head to the Mecum Harrisburg Auction, which will take place between July 31st and August 3rd. Look for it under Lot S114. 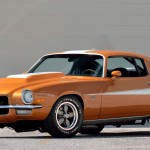 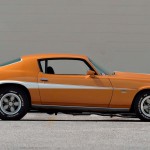 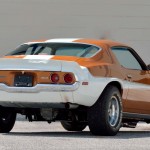 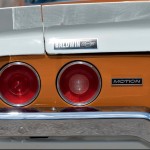 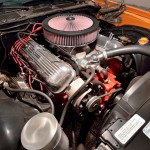 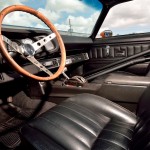 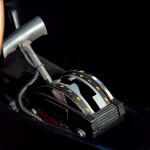