Fernando Alonso got his first taste of IndyCar’s universal aero kit on an oval this week, completing a successful test with McLaren Racing at Texas Motor Speedway.

The two-time Formula 1 champion completed 105 laps of the 1.44-mile track – the majority of those coming in the afternoon after McLaren experienced some teething issues with its freshly built Chevrolet-powered test chassis.

The purpose of this test was for the Spaniard to familiarize himself with the new IndyCar equipment ahead of the first open test for the Indianapolis 500 later this month. IndyCar was still using its higher downforce, manufacturer-specific aero kits when Alonso participated in the 2017 Indianapolis 500.

“It was definitely quite special,” Alonso told IndyCar.com after his Texas outing. “The oval is very different  (to Indianapolis), so you feel really the banking and you feel the compression on the body. It’s definitely physically different, the feeling you get, so that was interesting.” 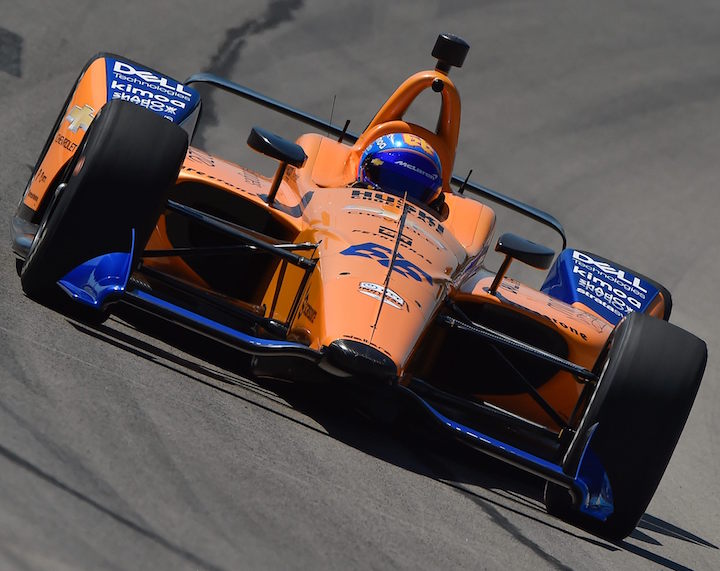 Alonso also said the new universal aero kit was more difficult to drive, a unanimous opinion among drivers since it was introduced for the 2018 IndyCar season, and that he and the team have a lot to work on with regard to setup.

“I remain on the idea that this universal kit is said to be more difficult to drive with a little bit less downforce,” he said. “So you need to optimize the setup a little bit different with this kit and it will depend on a little bit of that (test) week on the wind conditions, the temperature and, more importantly, especially for me, how these kits behave in traffic.”

Alonso tested an Andretti Autosport machine with the universal aero kit on the road course last year, participating in a brief test at Barber Motorsports Park, but this marked the first time he was able to sample the car on an oval.

Fernando Alonso and his No. 66 McLaren-Chevrolet will appear on track again later this month for the Indy 500 open test on April 24th.