The first Chevrolet engine failure of the 2019 NTT IndyCar Series occurred during yesterday’s Indy 500 open test, with the Carlin entry of Max Chilton going up in a plume of smoke as it entered Turn 4.

After Chilton pulled the smoking Chevy into the pits, the No. 59 car’s engine bay briefly caught fire before his Carlin team was able to extinguish the tiny inferno. The incident caused a stoppage in the session as Indianapolis Motor Speedway workers went to inspect the track and ensure Chilton’s car hadn’t dumped any oil onto the surface.

The yellow flag was the second interruption of the day after a rain delay forced a four-hour break in on-track activities earlier in the morning/afternoon.

Chilton’s Carlin entry wasn’t the only Chevrolet to experience problems. The McLaren Racing Chevrolet of Fernando Alonso was forced to take a tow back to the pits after his Papaya Orange car’s battery died on the backstretch. This problem was related to to the McLaren’s electronics and not the Chevrolet-Ilmor 2.2-liter twin-turbo V6 engine, however. The McLaren team was able to get Alonso back out on track before the end of the day, though the team was clearly put on the back foot, with Alonso posting the slowest time of the day across both sessions.

Alonso wasn’t surprised by the teething issues, however. The test marked the first time the freshly built Dallara-Chevrolet had run since it was assembled at McLaren’s HQ in the England.

“For us, obviously, we lost a little bit of time at the beginning,” Alonso said. “This was more or less expected because, as I said, it was a brand new chassis, brand new car. Everything fit in the last week. We expect to run slowly, step by step, short runs at the beginning. It’s what we did.”

“It’s good to be back, to feel again the magic of the place,” he added.

The fastest lap of the day was set by Team RLL’s Takuma Sato, who set a lap of 226.993 mph in the No. 30 Honda entry, while the No. 20 Chevrolet of Ed Carpenter was close behind with a fastest lap of 226.414. Sato also topped the no-tow speed charts for the day. 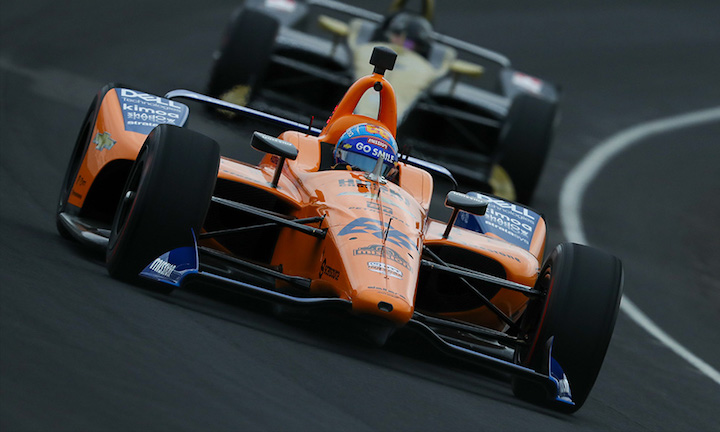 The NTT IndyCar Series now turns its attention to the IndyCar Grand Prix at the IMS road course, which will go green on May 11 at 3 pm ET. For now, you can watch highlights from the first Indy 500 test of the year in the video embedded above.