Democratic presidential candidate Bernie Sanders descended upon Lordstown, Ohio yesterday to host a town hall meeting with town residents. Front and center was General Motors and its decision to indefinitely idle the GM Lordstown factory. Sanders said that, if elected president, he would bar companies like General Motors that would opt to shut down U.S. factories from obtaining federal contracts. He’d also freeze current contracts.

“If entities like General Motors think that they can throw workers out on the street while they’re making billions of profit, and then move to Mexico and pay starvation wages and then line up for federal contracts, they’ve got another thing coming,” Sanders said during the campaign stop.

Lordstown has become a political flashpoint in recent months after GM proposed to indefinitely idle the factory last November as part of a restructuring effort. While many of the plant’s employees have transferred to positions at other GM factories, the loss of the plant could devastate the local economy, which is estimated to lose $3 billion this year alone. 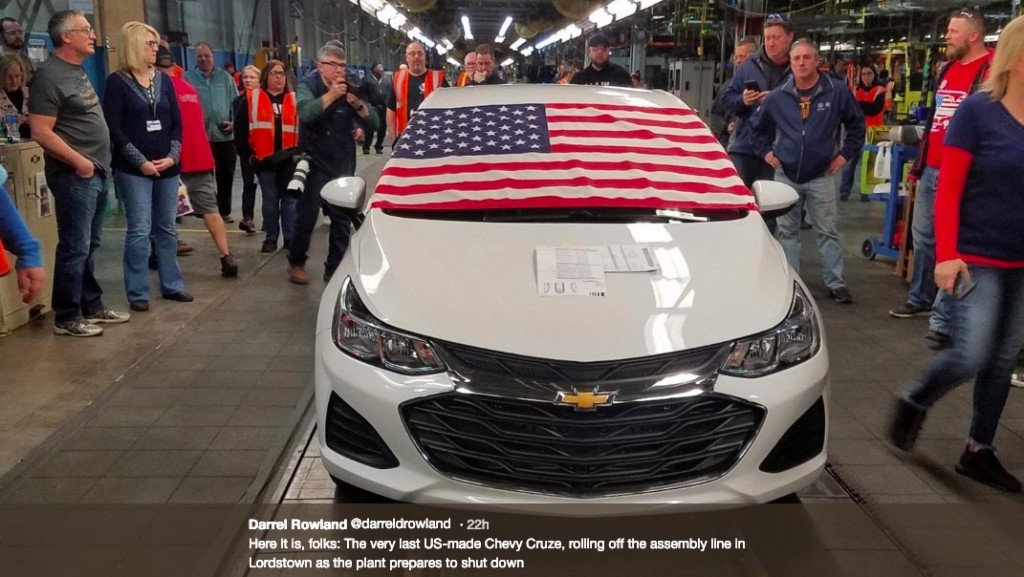 U.S. President Donald Trump has excoriated General Motors and CEO Mary Barra over the automaker’s decision to idle the factory. Chevrolet Cruze production ended in early March; the Cruze was the plant’s only product. While some parts production is ongoing and could last until June, the future of the factory remains uncertain until GM begins negotiations with the United Automobile Workers union in September.

The history of the Lordstown factory is storied and complex all the same. Production began in 1966 with the Chevrolet Impala. Since then, the facility has produced a host of small GM vehicles. In 2010, GM announced the Chevrolet Cruze, with it replacing the production of the Chevrolet Cobalt at Lordstown. At one point, the factory employed 4,700 people across three shifts. It’s believed that two factors – slowing sales and consumers flocking to crossovers and SUVs, rather than sedans – contributed to GM’s decision to slowly begin eliminating shifts at the plant. But it should be noted that competitors, especially Japan’s Toyota, Honda, Nissan, and Mazda, as well as Korea’s Hyundai and Kia, along with Volkswagen, are continuing to sell cars in the segment that the Chevy Cruze competed in prior to its discontinuation.