A 1978 Pontiac Macho T/A will be sold at Mecum’s Phoenix Auction later this month, representing the rare opportunity to own one of the late 1970s Trans-Ams that was tuned in-period by DKM.

The Macho T/A, which was the brainchild of Pontiac dealers Dennis and Kyle Mecham (hence the DKM name), was a mildly tuned and slightly refined take on the Pontiac Firebird Trans-Am. The brothers rejetted the 400 cu. in. V8’s carbs, added a set of Hooker headers, installed a real full dual exhaust and installed a functional hood scoop. Heavy duty Koni shocks, new front springs and some small visual upgrades rounded out the package, which sold for around $3,200 in the 1970s.

This Macho T/A, which is just no. 135 of 204 produced in 1978, has spent its entire life in Arizona and retains many of the original Mecham-installed parts, including the Hooker exhaust. The previous owner also slapped a bunch of modern-day upgrades on the 400 V8 engine, including new pistons, new heads, a Comp Cams camshaft, a QuickFuel carb and Edelbrock Performer aluminum intake manifold, among much more. The old four-speed manual transmission has also been tossed out in favor of a modern TKO-500 five-speed.

Other modern upgrades applied to this car include 18-inch BRE/Year/One wheels designed to look like the Trans Am WS6’s original snowflake wheels, which are wrapped in BFGoodrich G-force Sport Comp 2 tires, and QA1 coilovers. The car came decently equipped from the factory as well with air conditioning, power windows and a hurst shifter. 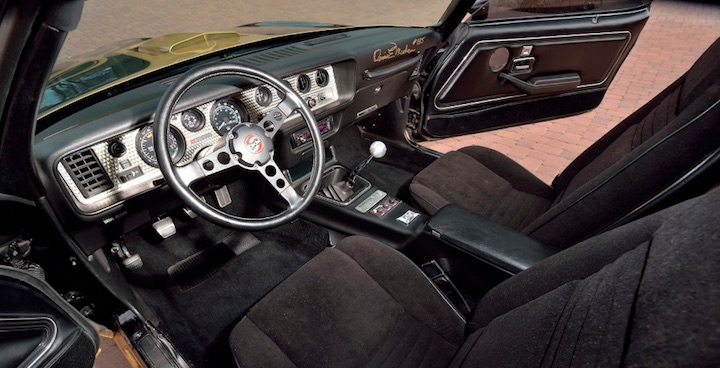 Mecum did not provide an estimate as to what the 1978 Pontiac Macho T/A will sell for. You can check the auction listing at this link for additional information and photos, and feel free to let us know what you think it’s worth in the comments below.