The Lordstown plant in Ohio will officially go idle on March 8, but the final Chevrolet Cruze has already made its way through the assembly plant.

Photos from employees of the final Chevrolet Cruze were sent to local CBS News affiliate WKBN and show the compact car with a cardboard sign that says “The Last Cruze.” Employees have also written on the car in marker with various quotes from rock band The Doors.

“I’ve survived despite you,” one of the phrases says on the unpainted body. 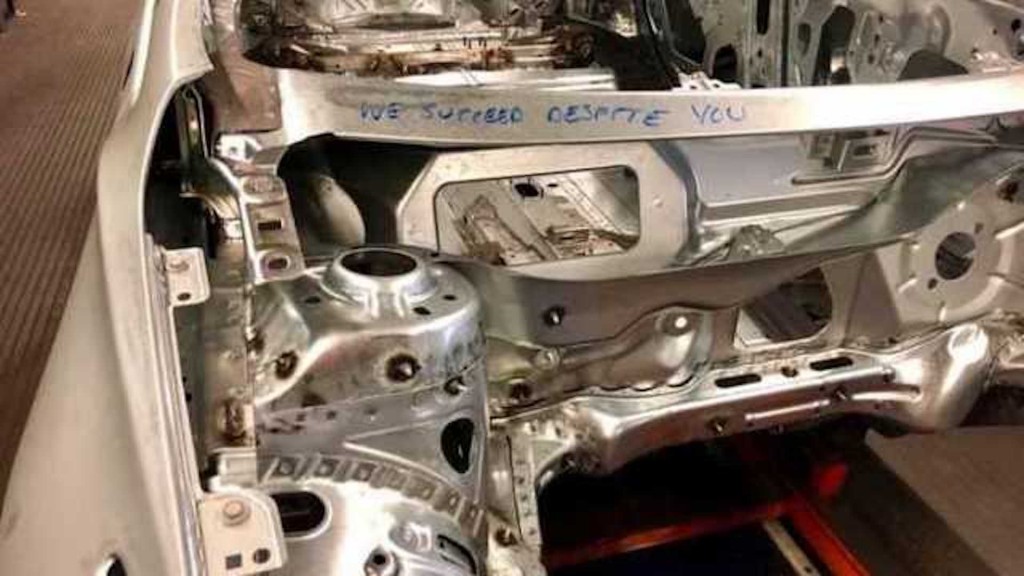 The first vehicle rolled off of the assembly line in 1966—a Chevrolet Impala. Over the course of decades, the plant has 16 million cars for drivers across the United States. Vehicles such as the Caprice, Bel Air, Vega, Cavalier, Cobalt and their lightly rebadged Pontiac counterparts all came from Ohio’s Mahoning Valley.

Leaders at the plant said the final Cruze will likely be white or silver as most of the final cars have been one of those colors. It’s unclear where the final car will ship to, but judging by the colors, it sounds likely to be bound for a rental fleet. It’s hardly an honorable end to the Cruze after GM shipped the final Chevrolet Volt to its heritage center, unless GM has other plans.

The Lordstown plant is one of four manufacturing facilities GM plans to “unallocate” this year. Two transmission plants in the U.S. and the Detroit-Hamtramck plant were also named in GM’s massive restructuring plan last November. The Detroit-Hamtramck plant, however, will stay online until 2020 where Cadillac CT6 and Chevrolet Impala production will continue for an extra seven months.

The Lordstown plant will receive no such stay of execution.

GM will need to negotiate the Lordstown plant’s final closure in a new labor contract with the United Auto Workers union this year. The current contract expires Sept. 14 and the union has already signaled its prepared for a battle to keep the assembly plants open.