Bugatti, a purveyor of seven-figure cars with 16-cylinder engines and record-breaking performance, isn’t really familiar with the term “restrained” so naturally, it decided to celebrate its 110th birthday in rather dramatic fashion.

The automaker debuted the one-of-one Bugatti La Voitre Noire at the 2019 Geneva Motor Show this week – an exclusive coachbuilt supercar based on the 1,500 hp Bugatti Chiron. Inspired by the Bugatti Type 57 SC Atlantic, the car blends svelte retro smoothness with modern-day sharpness and is described as “a feast of aesthetics,”  by Bugatti CEO Stephan Winkelmann.

Under the hood of La Voitre Noire is Bugatti’s 8.0-liter 16-cylinder quad-turbocharged engine, which is rated at 1,500 hp and nearly 1,200 lb-ft of torque. The world’s only example has already been sold to a wealthy unnamed Bugatti enthusiast for €11 million before tax, which is equivalent to just under $12.5 million USD, making this the most expensive new car ever sold. For that price, you could buy around 105 examples of the 2019 Chevrolet Corvette ZR1 coupe, which starts at $120,000 USD. 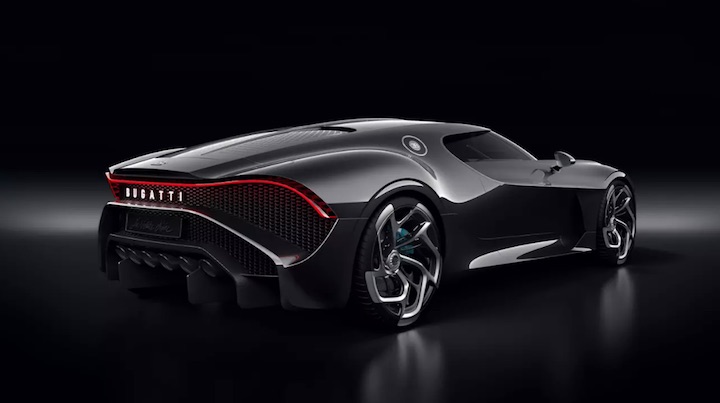 Sure, the Corvettes may not be as powerful as the Chiron, with the Bugatti making twice as much power as the 755 hp ZR1, but think of all the possibilities! Okay, you got us. We really have no idea what you could actually do with 100+ 2019 Corvette ZR1s. If we ever found ourselves in such a scenario, we would probably weld a roll cage in them and revive the long-defunct Corvette Challenge series. Now there’s an idea.

The Bugatti La Voitre Noire is on display at the 2019 Geneva Motor Show this week. It’s owner is expected to take delivery following the show, so take a good hard look at it – it’s unlikely it will be seen very frequently from here on out.