Just about everyone in America has seen an awful local car dealership ad. Turn on the radio or a local TV station in a small town or city and you’ll probably hear a headache-inducing jingle for the local auto mall or budget car dealership. Not only are these ads bad, they usually repeat during commercial breaks and never go off the air, sometimes sticking around for what seems like decades.

Not all local car dealership ads are bad, though. Two local automotive dealerships in South Carolina recently engaged in a humorous billboard burn battle, which has gone slightly viral online. The spat started when Ravenel Ford, located in Ravenel, SC, erected a billboard for the 2019 Ford Ranger that said “behind every good Ford is a Chevy.” A rival dealership, Marchant Chevrolet, which is also located in Ravenel, then responded, putting up a billboard nearby that said “because you won’t move out of the fast lane.” 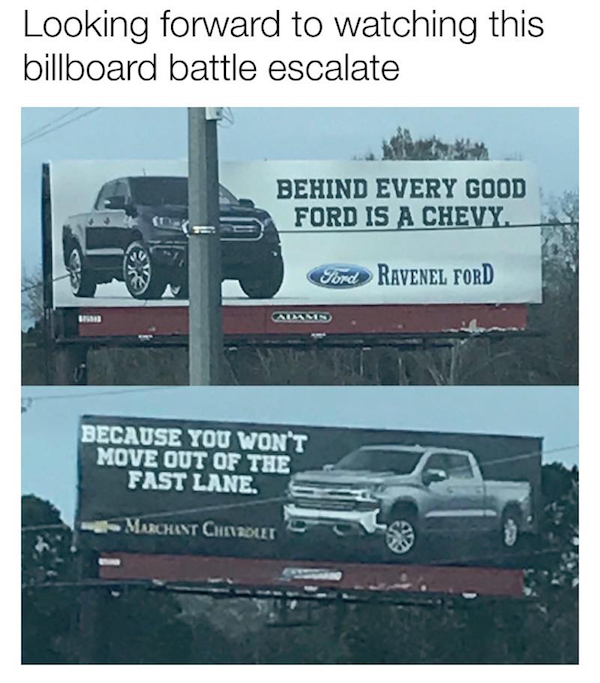 A humorous burn battle between two competing car dealerships or two rival automakers is always funny to see. The Ford vs Chevrolet battle is as old as the automakers themselves and it clearly isn’t going to fizzle out anytime soon, but both General Motors and Ford will agree that healthy competition results in a better product for everyone.

Now we’re waiting for the local Ram deal in Ravenel to step in with its own insult. We think a commenter on the Facebook page where we first saw this image already has the perfect comeback for them, commenting that we should just “Dodge the whole issue.” The Chevrolet dealership in question is also in the comment section, engaging in a humorous exchange with a commenter who pointed out that these two dealerships are owned by the same person. The dealer’s response? A GIF of Tom Cruise saying “it’s classified.” Bravo.