We recently captured a rather curious GMC Terrain prototype rolling around GM’s Milford Proving Grounds. At first glance, the GMC Terrain seen here looks just just like a normal Terrain. But looks a bit closer, and notice a silver cover on its upper and lower grilles. Our initial reaction would be to conclude that the vehicle seen here is a testing an upcoming accessory grille. Another option, although admittedly a stretch, could be that it’s testing the upcoming mid-cycle refresh/facelift of the compact crossover SUV. But there might be more going on here still. Our spy noted that the model was silent when it drove by, while also exhibiting no visible smoke from its exhaust pipes, a strange circumstance in sub-zero temperatures the day of the shoot. In addition, the camo on the grilles seems to close out the space from air. All that leads us to wonder whether this GMC Terrain is hiding an electric powertrain.

All of those qualities align particularly well with the theory that we’re looking at an EV mule of some sort, potentially one of an upcoming GMC Terrain Electric / GMC Terrain EV. General Motors previously announced that it plans to introduce a plethora of battery electric vehicles over the next several years. Not only that, but the automaker has plans on turning a profit on EVs, a feat no other automaker has been able to accomplish so far.

Whether this GMC Terrain prototype is a mule for an electric variant of the crossover or is simply testing out an accessory grille is anyone’s guess at this point. Stay tuned to GM Authority as we learn more, and subscribe for more GMC Terrain news and ongoing GM news coverage. 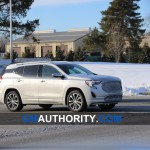 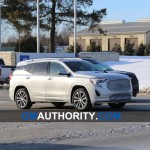 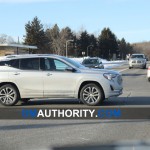 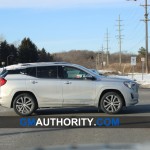 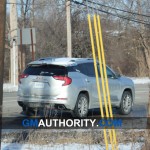