Texas-based tuning company Hennessey Performance Engineering debuted its own take on the Ford Ranger Raptor this past week.

Dubbed the Hennessey Ford Ranger VelociRaptor, the pickup promises to be more powerful and more capable than the standard version of the mid-size pickup, helping it take the fight the Chevrolet Colorado ZR2. 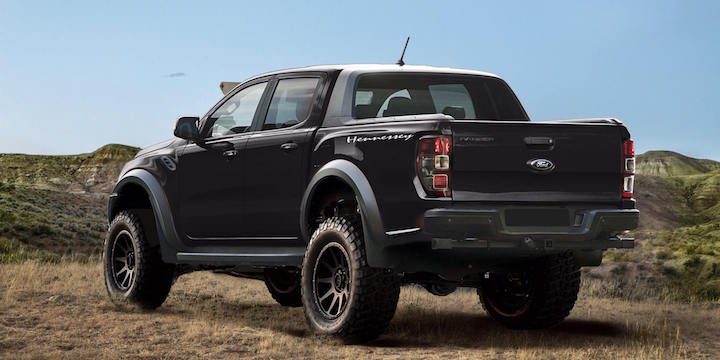 What does HPE do to transform the regular Ranger into a VelociRaptor? For starters, the company installs a high-flow air induction system for the 2.3-liter EcoBoost four-cylinder and a less restrictive stainless steel cat-back exhaust system. It also retunes the ECU and increases the 2.3-liter turbo’s boost, bringing output to around 350 horsepower and a meaty 385 lb-ft of torque.

This is an off-road truck, so the engine takes a back sat to the suspension. HPE hasn’t released too many details on what it has in store for the VelociRaptor’s suspension, with the company only saying the “stage 1 kit” will include a four-inch lift. There’s also an off-road oriented front bumper with a skid plate, 17-inch alloy wheels wrapped in BF-Goodrich off-road tires, aftermarket LED lights, an optional winch upgrade and an optional roof-mounted LED light bar.

With more much more power, the Hennessey Ford Ranger VelociRaptor would be quite a bit faster than a Colorado ZR2 or Colorado ZR2 Bison. But the Chevy, with its sophisticated DSSV shocks and OEM tuned suspension, would probably prove to be the more capable and refined offering. Ranger buyers looking for added capability are also pretty much forced into an aftermarket offering like the Ranger VelociRaptor, with Ford electing not to sell the new Ranger Raptor in the United States.

Only 500 units of the Ranger VelociRaptor will be built, with prices starting at an eye watering $64,950 – including the donor truck. If you already have a Ford Ranger, the package will cost $19,950 plus vehicle shipping. A 3 year/36,000 mile warranty is included as well.