Corvette Racing struggled in the FIA WEC 1,000 Miles of Sebring, with the team’s sole No. 63 Corvette C7.R of Antonio Garcia, Jan Magnussen and Mike Rockenfeller finishing eighth in class.

In a statement, the Chevy team said it “ran a solid race despite a couple minor setbacks,” in the pits that caused it to fall through the GTE Pro running order. The team started fifth in class and ran a race-high fourth, staying on the lead lap for the race’s entire duration, but didn’t have the pace to challenge the leaders.

After a quick nap for some, we’re back at @sebringraceway for our shot at #Sebring12 win No. 12. The rain from the end of the @FIAWEC has returned but hopefully not for long… #Corvette #C7R #Z06 @TeamChevy @IMSA pic.twitter.com/ASXGo58iZp

The GTE Pro class was won by the No. 91 Porsche 911 of Richard Lietz and Gianmaria Bruni, while the No. 81 BMW M8 of Martin Tomczyk, Nicky Catsuburg and Alexander Sims and the No. 67 Ford GT of Andy Priaulx, Harry Tincknell and Jonathan Bomarito completed the podium in second and third, respectively. 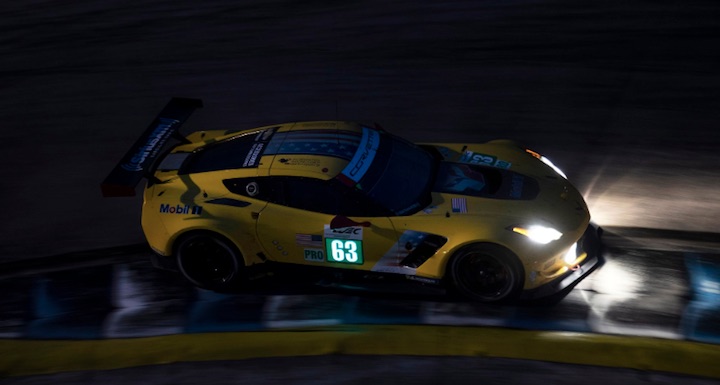 Garcia found it hard to stay with the leaders due to minor issues in the pits and the race’s minimal caution flags, but feels as though Corvette Racing gained valuable WEC experience this weekend.

“It’s a classic situation in the WEC,” he said. “Once you get out of sequence on your pit stops, you’re on your back foot the rest of the way. Little things that keep putting you back a few seconds keep putting you back and back and back. It’s hard to get that on pure pace. We lack a little bit of experience that the regular WEC teams have. But I think we’ve shown that our pace is there with them.”

Garcia said the race weekend was difficult, with Corvette Racing contesting both the WEC and IMSA rounds on Sebring, which were held on consecutive days. The team finished third and eighth in the IMSA race.

“It was difficult to do both races in the weekend, for sure,” he said. “But I’m happy to have been able to compete in this event at Sebring – both the WEC and IMSA races. It was a great result for Team Chevy. Friday we didn’t achieve a good result, but the good thing about Corvette Racing is that we always want to win. We tried to gamble tonight and that’s what we do – go for the win. Maybe if we had three more laps it would have been enough knowing we had better tires than our competitors and being closer to the leaders on the last restart. I’m satisfied with good points. Let’s go now for the championship.”

Click here for full results from the FIA WEC 1,000 Miles of Sebring.