For many people who want to make their slow car go fast, the easiest and cheapest way is to swap in a General Motors‘ LS engine. Not everyone appreciates just going fast, though – some people want their car to be unique, too.

The owner of this 1987 Buick Regal Turbo probably counts himself among the latter group. He could have dropped a modern-day LS engine with EFI in his car and bolted on a cheaper turbo or supercharger, which would have made a ton of power for relatively cheap, but instead, he opted for something a bit more..unexpected. So unexpected, in fact, that his car is the only one like it in the world.

Pop the hood on this somewhat unassuming Buick and you will find a Mercedes-Benz M275 twin-turbocharged 5.5-liter V12 lifted from a 2005 SL600. The engine has also been dressed up with a set of precision turbochargers and 1200cc injectors, although the owner isn’t sure how much power it makes. Power is sent to the rear wheels through the Mercedes SL’s five-speed automatic transmission and a MS3Pro ECU ensures the whole thing runs properly. 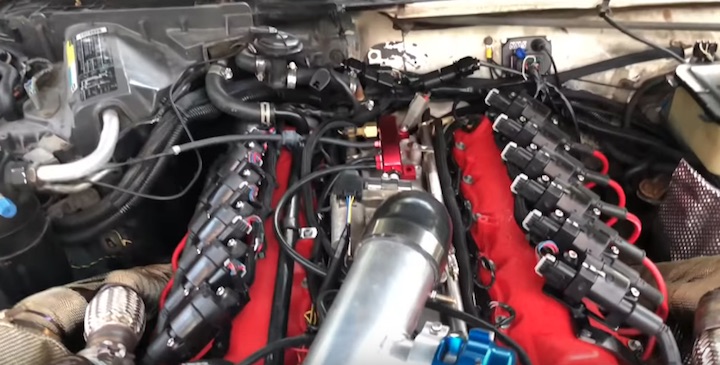 We’d love to see more of this build, and we just might, with the owner saying he may make a video documenting the build process in someday in the near future. For now, though, you can see the V12 1987 Buick Regal Turbo in action in the video above, albeit briefly. Let us know what you think in the comments below, too.

Like this story? Be sure to check out our Buick news page.