The 1980s and 1990s weren’t kind to automotive design. A recession, stricter fuel economy and safety standards, badge engineering, and a mindset that hard angles somehow exuded futuristic flair dampened automotive aesthetics. Few cars from the era are well regarded as pinnacles in automotive design and engineer. That doesn’t mean automakers weren’t trying to turn heads. Pontiac, the General Motors sub-brand that began branding itself as the company’s sportier offering, tried to do so with the 1990 Pontiac Grand Prix Turbo.

Only 3,500 examples exist, and, at the time, MotorWeek even compared it to some European offerings. The review, which dives deep into the Turbo’s quirky features, pours on the praise for Pontiac, noting the Grand Prix Turbo turned heads more than its European contemporaries. While the aesthetic choices of the time need a reckoning, it’s what was under the hood of the Pontiac Grand Prix Turbo that made the car an icon of the time.

Powering it was a 3.1-liter turbocharged V6 tuned by ASC McLaren. It made 205 horsepower and 220 pound-feet of torque. Power went to the front wheels through a four-speed transaxle, which was to handle the additional power. It ran a quarter-mile in 17.8 seconds at 86 miles per hour. A sprint to 60 mph took 7.9 seconds. 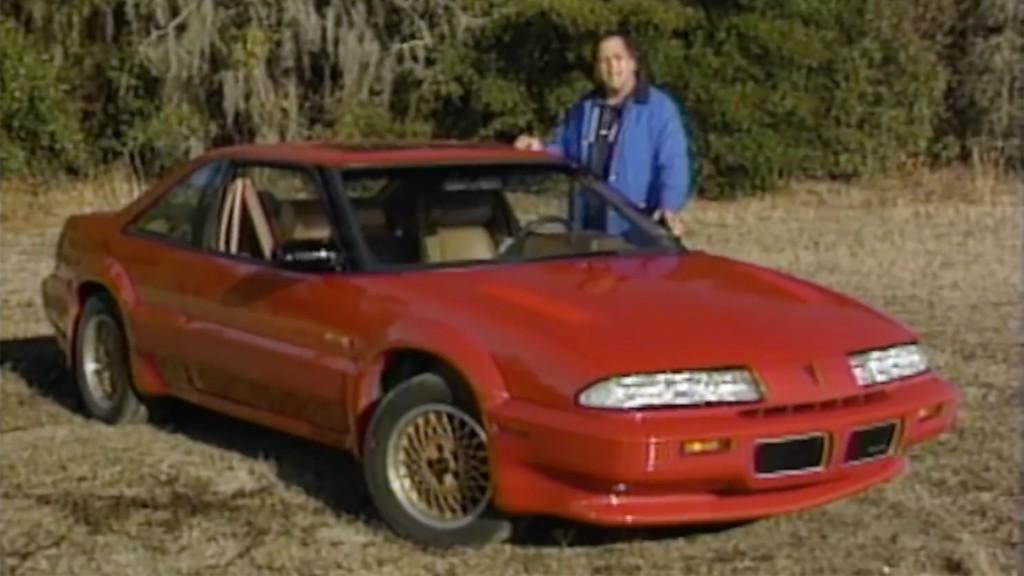 While the outside is certainly interesting to look at—an awkward coupe with lengthy proportions—the inside is equally weird. The car featured a downright annoying looking seat belt attached to the door and permanently buckled thanks to the car’s lack of airbags. This was a solution to federal regulations at the time that required either an airbag or automatic seatbelts. Instead of an airbag; the steering wheel put radio controls right in the middle.

At the time, Pontiac billed itself as a sporty and luxurious brand. Options on the Grand Prix Turbo were sprase—leather upholstery ($450), a compact disc player, and a sunroof ($650) were all Pontiac offered. It came with power everything, including the seats that sported power lumber, thigh, bolster, and headrest functions.