With the arrival of the new 2019 Ford Ranger, the mid-size pickup is back in a big way in North America. There’s now no shortage of choice in the segment thanks to the Chevrolet Colorado, GMC Canyon, Ford Ranger, Toyota Tacoma and Honda Ridgeline, so each automaker’s respective offering had better be good if it wishes to be competitive in such a saturated marketplace.

Edmunds recently pitted three of the major players in this segment against each other: the Toyota Tacoma TRD Off-Road, Chevrolet Colorado Z71 and Ford Ranger FX4. Each of these trim levels is fairly similar, representing the more affordable off-road variant of each truck, so the car buying publication set out to see which of them offers the best balance between on-road comfort and off-road capability before deciding on a winner. 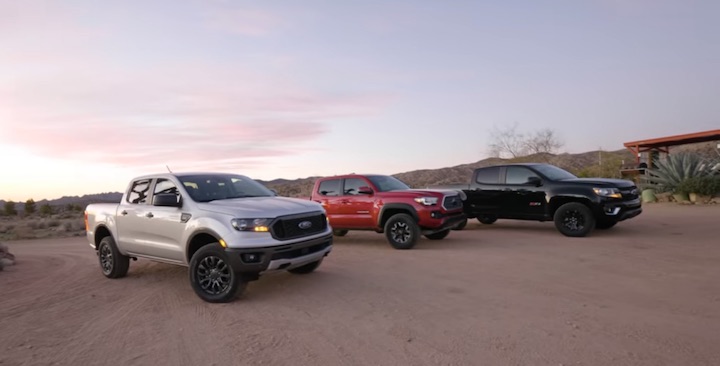 Despite the Ranger being the most up-to-date truck (at least for our market, anyway), Edmunds was unimpressed with aspects of its interior layout and functionality and was underwhelmed by its off-road performance and on-road comfort. The Tacoma received deserved criticism for its lack of Apple CarPlay and Android Auto and also its aging powertrain, which lacks refinement and torque, and slow steering. The reviewers like the Tacoma’s interior, however, which is tough-looking and practical.

The Colorado, meanwhile, was described as having an interior that is a “mixed bag” with functionality but otherwise impressed in on-road and off-road testing. The reviewers were impressed with its overall comfort as well.

The Honda Ridgeline, if you’re wondering, was excluded from this test due to its lack of off-road capability. The Jeep Gladiator is also not yet available for comparison tests like these, to our knowledge, and thus can’t be compared against these trucks. The Gladiator is expected to start in the low $30,000 range for the base model, so it won’t be priced much differently than these trucks when it goes on sale later this year.

Check out the full review embedded above to see which of these new mid-sized trucks is crowned the segment king.