Denny Hamlin led a trio of Toyotas across the finish line to win the 2019 Daytona 500 and give Joe Gibbs Racing a historic 1-2-3 finish. The top-finishing Chevrolet driver was Ty Dillon, who crossed the finish line sixth in his No. 13 Chevrolet Camaro ZL1 after keeping his nose clean to survive a series of field-collecting wrecks. 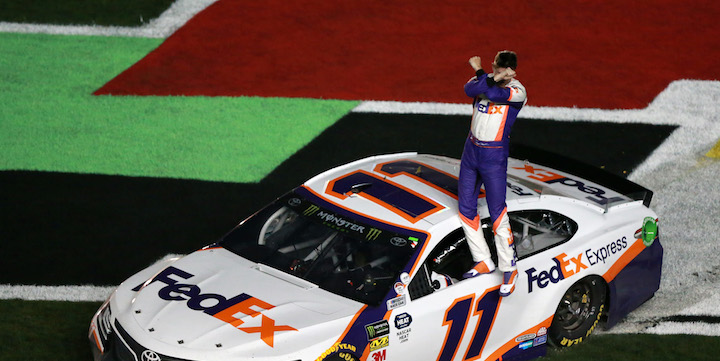 Hamlin started alongside his JGR teammate Kyle Busch for a two-lap overtime shootout on lap 206. When the green came back out, the Hamlin easily put a gap between him and Busch took the chequered flag. Busch led fellow JGR Toyota driver Erik Jones across start/finish, with the two Ford Mustangs of Joey Logano and Michael McDowell completing the top five.

“It was just one of those days where I felt like it was meant to be,” Hamlin said post-race. “Hats off to Kyle (Busch) as well. I know he was eagerly wanting his first victory in the Daytona 500, but today we just weren’t going to be denied.”

Drivers kept their noses clean in the first two stages, for the most part, but the inevitable ‘Big One’ came late into Stage 3. Restarting with 10 to go following a late-race caution for debris, the field wrecked as they headed into Turn 3. The No. 21 Ford of Paul Menard made contact with the No. 95 Toyota of Matt DiBenedetto and sent it jetting across the track and into the outside wall, collecting numerous cars.

Menard, who was involved in a field-collecting wreck in the Daytona Clash earlier in the week, took blame for the crash. His chances at victory in the Clash race were thwarted after contact between he and Jimmie Johnson caused a crash that wrecked the majority of the field.

“I’ll take the blame for that one, I guess,” he said. “We had really fast Fords. I sped on pit road and got us behind. We had to play catch-up. We had a shot there at the end though. It was time to go. It’s frustrating that we have to put ourselves in that position to race this way. I tried backing off but wrecked a lot of cars.”