Jeff Gordon fans will be greeted with a pleasant site when the starting grid lines up for the 2019 Daytona 500, with the No. 24 Chevrolet Camaro ZL1 of William Byron set to start the great American race from pole position.

Byron blitzed the competition to pole position during Sunday’s Monster Energy NASCAR Cup Series qualifying at Daytona International Speedway, turning in a 194.305 mph lap (46.319 seconds) and edging out the No. 88 Chevrolet of Alex Bowman, which will start second on the grid. 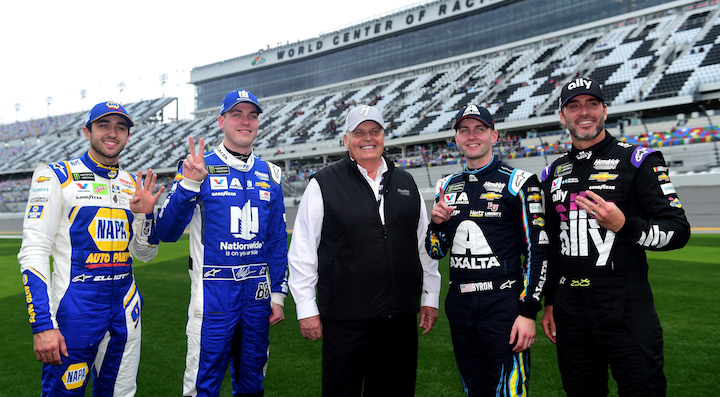 Bowman’s 194.154 mph lap was enough to relegate the No. 48 Chevrolet of Jimmie Johnson to third. Yet another Chevrolet, the No. 9 of Chase Elliott, was fourth – completing a lockout of the two front rows for Chevy. Additionally, the No. 8 Chevrolet of Daniel Hemric was fifth, while reigning Cup champ and No. 22 Ford driver Joey Logano was sixth.

Only Byron’s and Bowman’s starting positions are locked in, however, with the Gander RV Daytona Duel qualifying races deciding the remainder of the starting order. The qualifying races are scheduled for Thursday evening.

Byron is hoping he and his new crew chief Chad Knaus can convert his qualifying success into a wain come Sunday and is happy to have the weight of the qualifying races off his back.

“We felt we were prepared and ready and this was sort of the first step of our process together,” Byron said post-qualifying, referencing his relationship with Knaus, who was formerly Jimmie Johnson’s crew chief. “Hopefully, it goes well next Sunday. We can kind of hang out during the Duel races, learn a little bit. It’s awesome.”