In the world of heavy-duty pickup trucks, there are few engines as popular and durable as the Duramax diesel. The first Duramax made its way into a General Motors vehicle in 2001, and have been available ever since—often as an optional upgrade that added horsepower, torque, and diesel durability. With General Motors ushering in the all-new 2020 Chevrolet Silverado HD and 2020 GMC Sierra HD pickups, the automaker updated the L5P Duramax V8 engine first introduced for the 2017 model year, redesigning it for better efficiency. Gale Banks of Banks Power recently disassemble the L5P Duramax V8 engine, highlighting several of the changes made the engine.

One of the most noticeable changes to the design of the L5P Duramax V8 is the addition of a second belt plane. One pulley system operates the alternators, air conditioning, and other accessories while another pulley system just operates the massive 28-inch fan, which is two inches larger than the fan on the outgoing design. The additional cooling, aided by a larger radiator, will help keep the engine cool under heavy stress situations, like hauling at high altitudes. 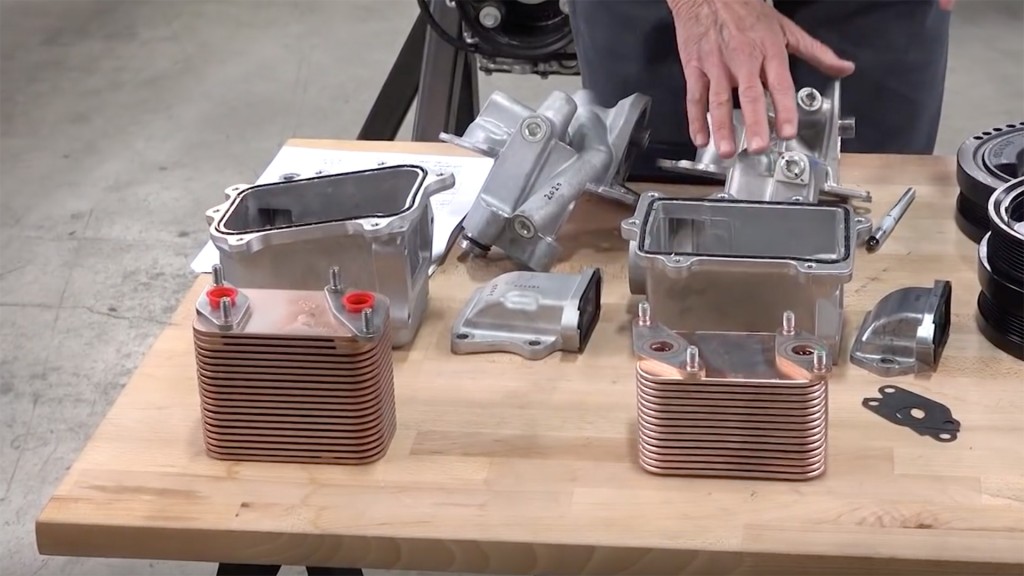 Another part engineers improved was the oil cooler. The new L5P engine features a larger heat exchanger with more surface area and a new design to the exchanger fins, increasing cooling surface area by 36 percent. The other improvement is related to fluid dynamics. The old oil cooler had the oil entering and leaving the cooler on the bottom, meaning the exchanger wasn’t used to its full capacity. The old design meant little oil reached the top of the exchanger. The new design is cut at an angle with the oil entering the bottom of the cooler and leaving the top. Banks believe this new design could result in 45 percent more heat rejection over the previous design.

Getting a mini deep-dive into the L5P Duramax V8 engine from Gale Banks is a treasure. The man is an automotive legend and his decades of knowledge and expertise make listening to him discuss any automotive related topic easy to follow and understand. You don’t need an engineering degree to enjoy Banks. Banks says engine production should begin in April with vehicle production starting in May. The engine will make 445 horsepower and 910 pound-feet of torque, giving the Chevrolet pickup its 35,500-pound towing capacity.