When GMC revealed the 2020 Acadia on February 18th, it only provided three photos to go along with its announcement, and all three were digitally altered in some way, making it rather difficult to really appreciate the updated design of the midsize crossover SUV. Luckily, our spy photographers managed to catch up to a completely undisguised tester of the 2020 GMC Acadia facelift on the streets of metro Detroit, giving us our first look at the updated model.

The vehicle seen here is the SLT trim level coated in (what appears to be) Ebony Twilight Metallic. Thanks to gobs of recent showfall in the Detroit area, the body is filthy – giving the Acadia some added charisma. 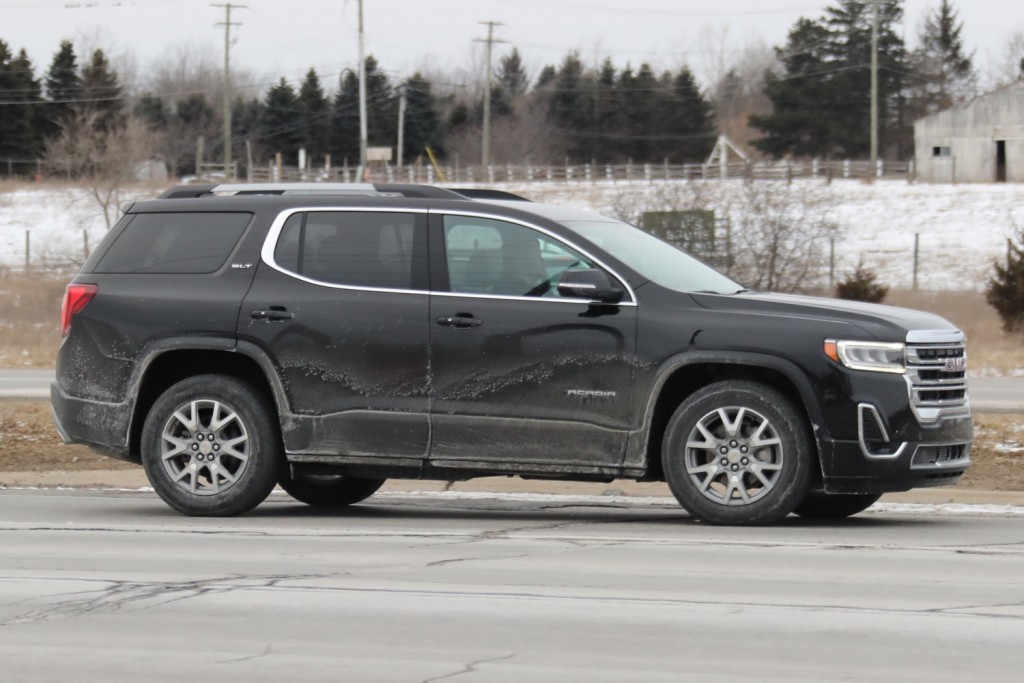 The 2020 GMC Acadia features an updated exterior design that’s bolder. It all starts with a new grille that’s part of the new front fascia, both of which are more rugged and upright than the pre-facelift model. The signature GMC C-shaped lighting has also been updated for the facelifted model, and it comes across really well in these real-world pics.

As you can see in these photos, the C-shaped Daytime Running Light (DRL) features elongated horizontal elements that wrap the top and bottom portions of the headlight. In addition, the white C-shaped DRL switches to an amber hue when the turn signal (and/or the hazard lights) are enabled. The 2020 GMC Acadia refresh also brings LED-based forward lights as standard equipment, but they are not enabled in this model. 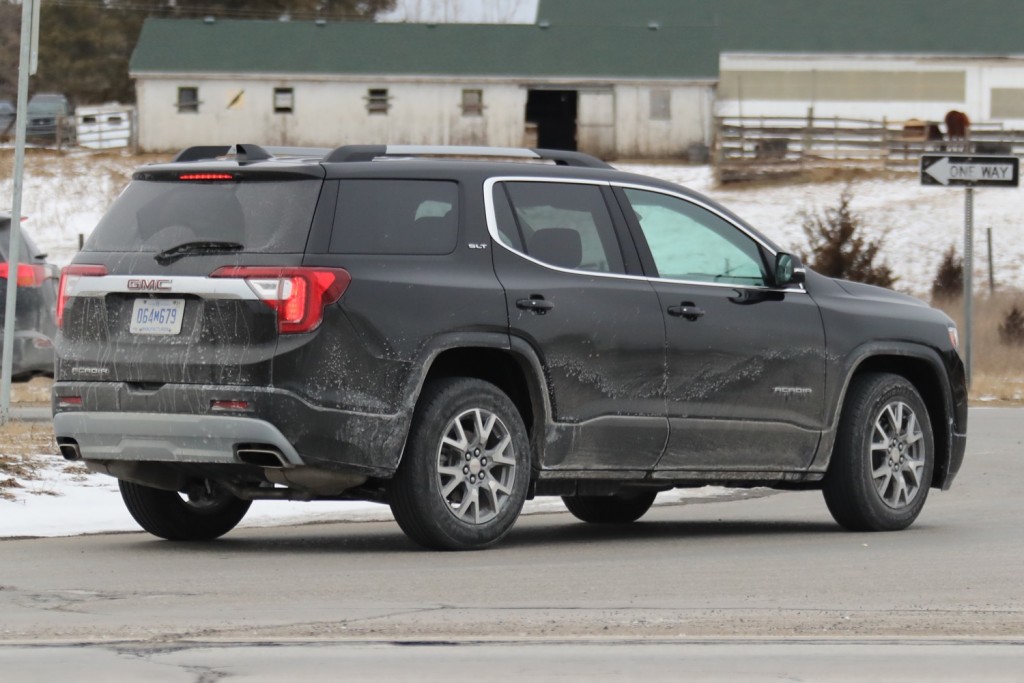 The 2020 Acadia also delivers new, trim-specific 18- and 20-inch wheel designs. The model seen here rides on a new set of what appear to be 18-inch units. Also take note of the new outside mirrors, which now feature integrated LED turn signals as well as a power-folding feature standard on Denali and available on the SLT. The pre-facelift Acadia did not feature either a power-folding feature or an integrated turn signal.

Out back is a new integrated rear fascia with a new set of tailamps. Interestingly, the C-shaped lighting signature seen at the front has been reduced to a vertical bar at the rear. 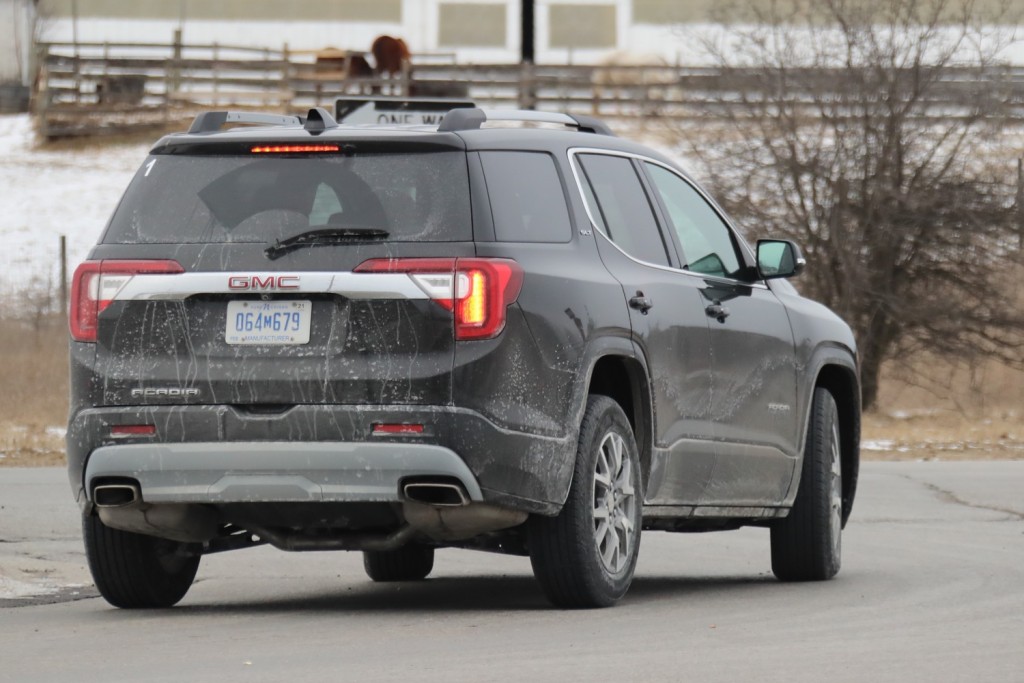 Inside, the 2020 GMC Acadia facelift features a redesigned center console with enhanced storage space along with unique Denali interior color schemes and a new, open-pore wood decor. The introduction of GM’s Electronic Precision Shift enables more storage room in the center console by replacing the conventional gear selector lever with an electronically-controller gear selection consisting of intuitive push buttons and pull triggers. Photos of the new center console with the EPS feature are currently not available; in fact, no photos of the 2020 Acadia’s interior are available.

Under the hood, the 2020 GMC Acadia gets several new updates. First, the existing, naturally-aspirated 2.5L LCV I4 and 3.6L LGX V6 carry over from prior model years. But for the 2020 Acadia, the new GM 9-speed automatic transmission replaces the 6-speed unit. The nine-speed’s additional clutches and gears offer better optimized acceleration and efficiency, and engine noise is reduced during cruising for greater refinement. 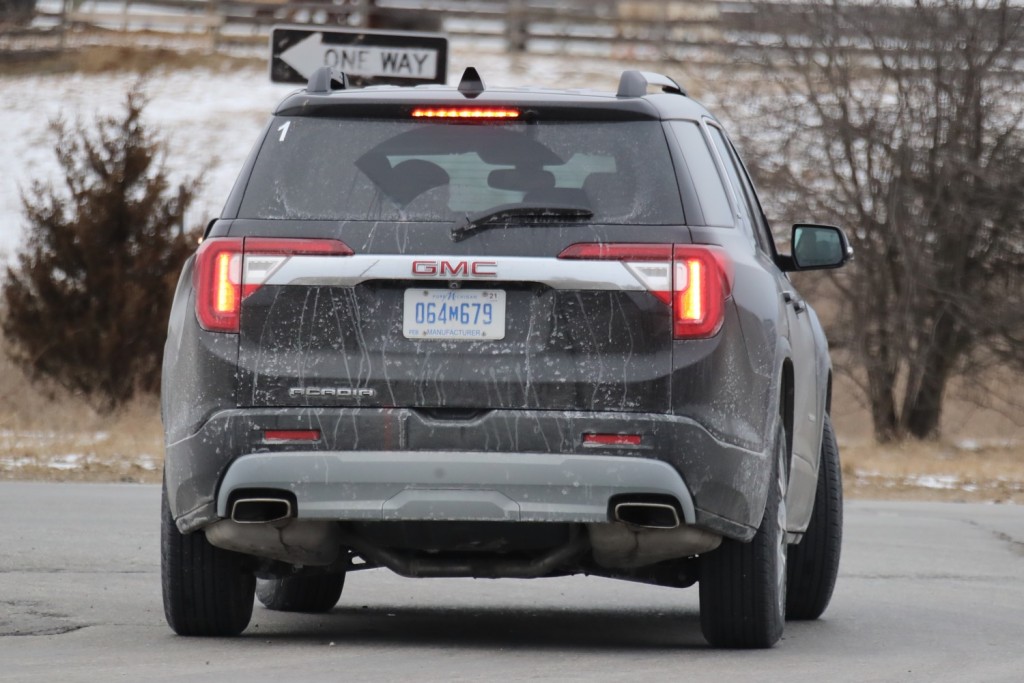 The last change is the introduction of GM’s new, turbo-charged 2.0L LSY I-4 engine in the 2020 GMC Acadia. It is standard on SLT and Denali models, expanding the Acadia’s propulsion choices for customers and adding a new dimension to the crossover’s performance.  In the Acadia, the all-new, boosted four-banger makes 230 horsepower and 258 pound-feet of torque. It gets mated to the same 9-speed automatic gearbox as the 2.5L and 3.6L.

The 2020 GMC Acadia goes on sale this fall, with production at the GM Spring Hill assembly plant in Tennessee.