The Canadian workers union Unifor is stepping up its tactics to save the Oshawa factory from closing at the end of this year. The back-and-forth between General Motors and the union continue to increase in severity and urgency. Unifor’s latest tactic is to block access to GM’s Canadian headquarters, forcing employees there to work elsewhere—and it appears Unifor President Jerry Dias won’t stop until the union gets what it wants.

“GM headquarters will be down and it will stay down,” Dias said last Wednesday, according to Automotive News. “This is going to become a very major community initiative for us.”

The headquarters remained quiet last week as David Paterson, GM Canada vice-president of corporate and environmental affairs, told Automotive News many of the employees at GM’s Canadian corporate office were able to work from home adding, company operations were unaffected. 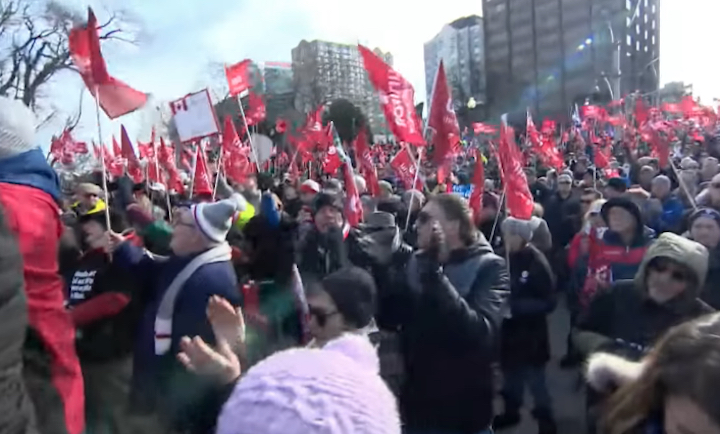 This isn’t the first time union members blocked access to GM’s Canadian headquarters. In 2008, an Ontario Superior Court judge ruled a nearly two-week blockade by the Canadian Auto Workers was illegal, according to the publication. Peterson said GM Canada considers Unifor’s blockade to be illegal also.

This blockade is just the latest in a long list of developments from Unifor. Dias called for a boycott of Mexican-built GM vehicles, which comes after GM concluded 2018 as Mexico’s larger producer and exporter of automobiles in that country. Unifor hopes its drastic tactics will get GM back to the negotiating table, but that’s unlikely. The automaker has rejected a proposal to keep the Oshawa factory open, instead suggesting the union begin assisting employees to transfer elsewhere.

The tit-for-tat between the automaker and the union started after the Detroit automaker announced a massive restructuring that not only called for the closure of five North American facilities but also called for blue- and white-collar layoffs, and the discontinuation of several models such as the Buick LaCrosse and Chevrolet Impala.

In response, Oshawa employees and other union members have walked off the assembly line, held sit-in protests, and protested the automaker at the Detroit waterfront. Unifor is pairing its boycott, blockade, and other rebellious acts with an aggressive media blitz, buying ads on TV, in print, and on billboards as a way to get the attention of GM executives.

A blockade of GM’s Canadian headquarters isn’t all the company has planned. The blockade will be an ongoing effort from the union, which will show up at other GM facilities and suppliers.

“The simple reality is that we’re not going to stop,” Dias said.