General Motors has partnered with Warner Bros. Pictures and LEGO to build a life-size 2019 Chevrolet Silverado 1500 Trail Boss entirely out of LEGO bricks.

The massive sculpture, which is the first full-size Chevrolet to be constructed from the popular plastic building blocks, was put together by eighteen specially trained LEGO ‘Master Builders’ who spent more than 2,000 combined hours selecting and placing the 334,544 pieces on the truck. The truck is made mostly of red, white, black and grey LEGO bricks, but also includes clear bricks for the working headlights, along with amber-tinted bricks for the indicators.

This undertaking, which is also intended to promote ‘The LEGO Movie 2: The Second Part’,  continues the partnership between Chevy and Warner Bros. Pictures that began a couple of years back with ‘The LEGO Batman Movie’ and the life-size Chevrolet branded LEGO Batmobile that debuted at NAIAS 2017.

In addition to the full-size LEGO Silverado Trail Boss, the new partnership will also a miniature LEGO Silverado High Country make an appearance in ‘The LEGO Movie 2: The Second Part’ film when it debuts in theaters on February 8th. 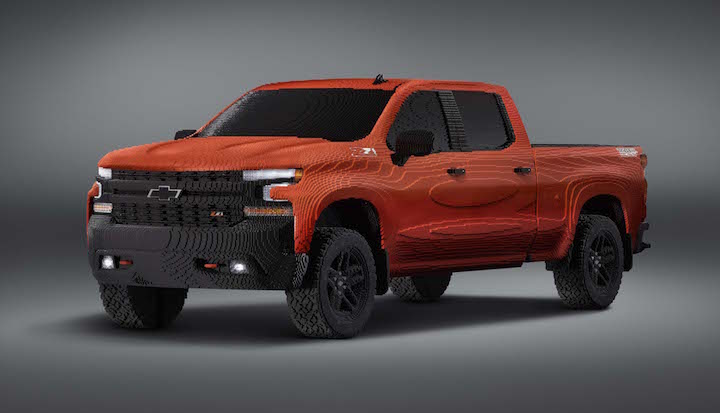 This stunt is yet another prong in Chevy’s new marketing campaign for the new Silverado, which includes numerous new ad sports for TV and digital along with branded magazine covers, branded Amazon delivery boxes and much more.

“Chevrolet is once again thrilled to be working with Warner Bros. to integrate the brand and one of our most iconic products – Silverado – into ‘The LEGO Movie 2: The Second Part,’” said Chevy truck marketing boss Sandor Piszar. “The themes of determination and teamwork in the new movie align perfectly with our Chevy brand values and we are sure that the all-new Silverado has the features, technologies and strength that would help Emmet, Lucy and their friends as they take on exciting new challenges.”