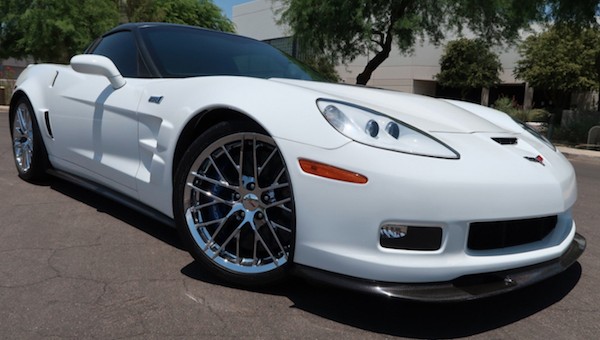 The 2019 Chevrolet Corvette ZR1 is a massive achievement for General Motors, making an incredible 755 hp from its 6.2-liter supercharged LT5 engine and somehow managing to put it all to the pavement.

But as nice as the C7 ZR1 is, we must admit, we have a huge liking for the menacing C6 Corvette ZR1, otherwise known as the Blue Devil. The C6 Corvette ZR1 helped kick off an era of insanely powerful forced induction Corvettes, spawning the C7 Z06 and C7 ZR1. It may not have some of the aerodynamic parts or e-differential that the C7 Z06 and ZR1 have, but the C6 ZR1 is a raw, true to form package that can be had for a bargain.

Take this Lingenfelter-tuned C6 Corvette ZR1 that was recently sold on eBay for example. It has a Lingenfelter LPE 710 package, which includes upgrades like a new supercharger pulley, Lingenfelter air intake system and a cat-back exhaust system, bringing output to a claimed 730 hp. The owner of this car has also installed nitrous, which can give it a temporary 200 hp boost for a total output of 930 hp. The C6 Corvette ZR1 is also equipped with the 3ZR package and includes comfort-minded options like 3ZR navigation, a heads up display and heated and power adjustable seats. All ZR1s were equipped with a six-speed manual transmission and this example also has the optional chrome alloy wheels.

The owner managed to sell it for $64,950 on eBay, which is below market value and seemingly good value for whoever the lucky winning bidder is. With just 8,000 miles on the odometer and a full CarFax report, this Corvette is a lot of car for the money with the right documentation to boot. It’s no C7 ZR1, but for quite a bit less money, this sale will certainly get you thinking about the Blue Devil once again.