The No. 5 Action Express Cadillac DPi-V.R team has faced another set back for the 24 Hours of Daytona, with Mike Conway having been forced to pull out of the race due to travel issues.

Conway, who normally races for Toyota in the FIA WEC’s LMP1 class, faced visa-related travel delays leaving England Thursday, forcing him to back out from his co-driver role in the Mustang Sampling-sponsored Cadillac DPi-V.R. He was set to share the car alongside Joao Barbosa, Christian Fittipaldi and Filipe Albuquerque.

This marks another setback for the No. 5 team, which was unable to set a lap in qualifying after the Cadillac prototype’s brakes caught fire.

“We just got off the phone with Mike, he has been delayed and is still in England,” Action Express Racing team manager Gary Nelson told Racer. “We are very disappointed that we won’t be able to have Mike in our car for the race. With the delay, it became obvious that he would not be able to make the trip to Daytona in time for the final practice session.” 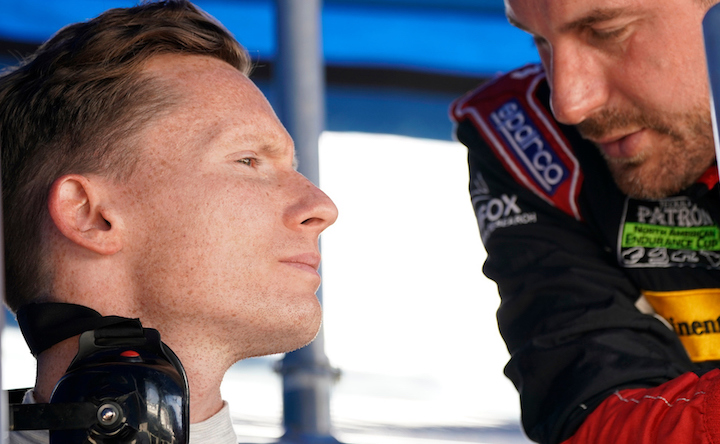 Foreign drivers frequently encounter visa problems coming to race in the United States, as the process to apply for and receive the proper documentation can be lengthy and racing schedules are often fast-paced.

“The process to get a visa is so long,” Conway’s Toyota LMP1 teammate Kamui Kobayashi, who is also racing a Cadillac DPi-V.R in Daytona this weekend, explained. “We started to work two months ago, and we got it on Tuesday.”

Kobayashi is driving the No. 10 Wayne Taylor Racing Cadillac DPi-V.R alongside Fernando Alonso, who is also a Toyota LMP1 expat, Jordan Taylor and Renger van der Zande. Kobayashi and Alonso are among a handful of former Formula 1 drivers in the DPi class at Daytona this year including Felipe Nasr, Juan Pablo Montoya, Pastor Maldonado, Alexander Rossi and Rubens Barrichello, among more.

See our 2019 24 Hours of Daytona viewing guide for information on how to follow the race.