The close-up photo and video, which was snapped by Detroit Local 4 News assignment editor Chuck Jackson, shows the mid-engine Corvette prototype driving down the interstate in Metro Detroit. This prototype has a rather interesting looking appendage on its front end, which looks to be an attempt to conceal the area where the vehicle’s nose comes to a point. We’ve seen a similar detail in other recent spy photos of the C8, so this could even be the same vehicle.

A still photo taken by Jackson also gives us a glimpse of the C8 Corvette’s steering wheel. The wheel looks as though it has a squarish shape, which is common for modern-day supercars. The LaFerrari and Ford GT also have squared-off steering wheels, as does the Aston Martin Vantage.

Designs like this first cropped up in motorsports, where steering wheels with flat sides have been used since the 1990s. The interior sketch drawn by a Corvette enthusiast who had allegedly seen the C8’s interior also featured a steering wheel with this design. 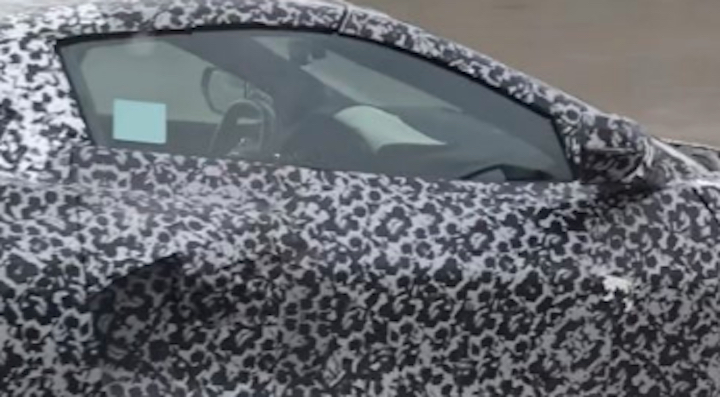 Rumors recently surfaced on a Corvette enthusiast forum indicating the mid engine Corvette would make its debut at the 2019 North American International Auto Show in Detroit. GM Authority’s sources previously indicated the vehicle’s debut would be delayed until around mid 2019, however, so it’s hard to say when we might finally see the highly anticipated Chevy supercar.

The racing version of the mid-engine Corvette, expected to be called the C8.R, was filmed testing at Sebring late last year. In the video, the prototype emits a high-pitched V8 exhaust note, possibly signalling the presence of a small displacement turbocharged V8 in the car.

Stay tuned for more information on the C8 mid engine Corvette as it becomes available. In the mean time, be sure to check out our other C8 Corvette news.