The fate of the Oshawa assembly plant in Ontario, Canada, will most likely be decided once and for all today. The Canadian Unifor that represents workers at the plant, Unifor, and General Motors will meet today in a final bid to keep the 101-year-old assembly plant online.

GM announced plans to close the Oshawa plant this past November as part of a North American restructuring operation. The plans call for four plants to go idle (Lordstown, Detroit-Hamtramck, and two transmission plants) and the closure of Oshawa. GM must negotiate the four U.S. plants’ closure with the United Auto Workers union later this year.

Unifor immediately rejected the plans to close the plant and the union’s president, Jerry Dias, will represent members in the face-to-face meeting, according to CBC. As it stands, the plant will close by Dec. 2019 as GM prepares to cull its vehicle lineup. Oshawa currently builds the Cadillac XTS and Chevrolet Impala. Both cars will exit production this year. Additionally, Oshawa has been responsible for final production of previous-generation Chevrolet and GMC pickups, however, the plan was only temporary as GM ramped up production of the 2019 Silverado and 2019 Sierra.

Today’s meeting will take place at GM’s headquarters in Detroit, Michigan, and Dias will hold a news conference in Windsor, Ontario, after talks conclude. 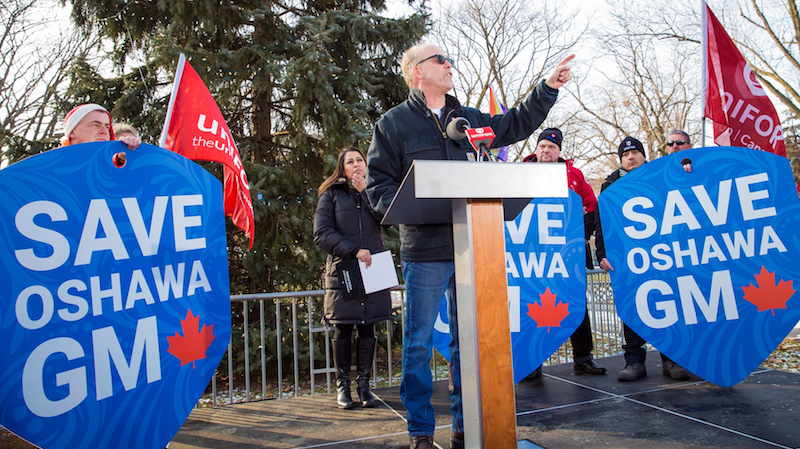 Dias accused GM of failing to build where it sells and noted continued investment in Mexico, rather than Canadian manufacturing. The UAW in the U.S. has also fired harsh words at GM, specifically after announcing the 2019 Chevrolet Blazer would be built in Mexico. The Blazer production announcement came the same day GM laid off the second shift at the Lordstown plant, which is scheduled to go idle this spring.

Today’s meeting is a long shot for Unifor members and GM hasn’t signaled it’s ready to reverse its decision to close the plant. Stay tuned as we bring you the latest on GM’s restructuring in North America.