You may have heard people say “as American as apple pie,” but there may be a new go-to phrase for describing peak Americana: “as American as sleeping in the bed of a Chevrolet Silverado at the Daytona 500.”

That’s the quintessentially American plan that General Motors has laid out for a lucky family of NASCAR fans attending this year’s edition of the Great American Race.

The automaker partnered with the American Cancer Society to reward the deserving family with the experience of camping in the Daytona International Speedway infield and sleeping in specially outfitted 2019 Chevrolet Silverado truck beds.

GM has dubbed this activation and charity effort ‘Hotel Silverado’. In addition to providing a family with a once-in-a-lifetime experiencing, the automaker likely also wanted to display the different ways you can use a Silverado truck bed.

“Leveraging all the available channels — traditional and new — along with unique partnerships and integrations allows us to reach both traditional truck buyers and potential new customers who may be drawn to the versatility and lifestyle that comes with owning a pickup truck,” said Chevrolet US vice president of marketing,  Paul Edwards. 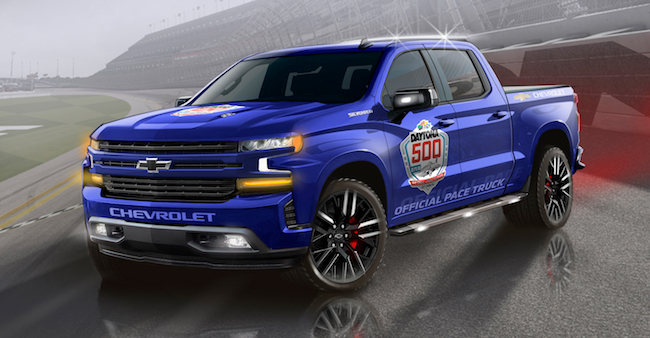 The 2019 Chevrolet Silverado will also pace the Daytona 500 this year – the first time the race will have been paced by a pickup truck of any kind. Behind the wheel of the Chevy pace truck, which will have custom Daytona 500 graphics and the necessary pace car lights and signals, will be former NASCAR Cup Series driver and Daytona 500 winner Dale Earnhardt Jr.

The 2019 Daytona 500 will go green on Sunday, February 17th at 2:30 PM ET, thereby kicking off the 2019 NASCAR Monster Energy Cup Series and putting an end to the long NASCAR offseason.

Chevy’s marketing campaign for the 2019 Silverado will also begin today when its new ad airs during coverage of the College Football Playoff National Championship, which begins at 8 PM ET.