General Motors workers from the Oshawa Assembly plant have held a protest at the Detroit River waterfront over the automaker’s decision to close the plant at the end of 2019.

Hundreds of GM Oshawa workers made the four hour drive to Windsor, Ontario for the protest, which borders GM’s home city of Detroit and sits in the shadow of its Renaissance Center headquarters. There the protestors spoke out against GM, telling Canada’s national news network, CBC, that they are turning their backs on the company and are no longer proud to work at the Oshawa facility.

Another worker vowed to boycott GM products from here on out.

“You can bet your ass I’m not buying a GM vehicle ever again,” they said.

Unifor, the labor union representing workers at the GM Oshawa plant, met with the automaker in Detroit earlier this month over the impending plant closure. Unifor president Jerry Dias attempted to bargain with the automaker to keep the plant open past 2019, but the automaker claimed the union’s various proposals did not address its current financial situation. 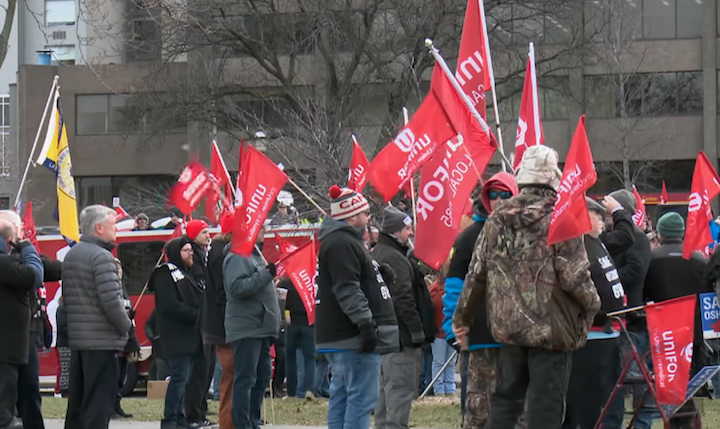 Instead, GM encouraged Unifor to work with it to help find work for the thousands of employees who will be left without work once the plant is closed. The automaker claims it has identified local placements with other companies for qualified employees, but Oshawa workers say those jobs are only open to tradespeople who did not go to university. One who spoke to CBC called the transition program a “crock.” Another said GM’s claims that there are thousands of jobs in the area are “outright lies.”

GM says it remains committed to Canada and will continue to invest in projects like its Mobility Campus in Toronto and its Canadian Technology Center (CTC) in nearby Markham.