The Grand Tour is back, hopefully satiating your endless desire for motoring entertainment. The jokes may be a bit stale, and the format is unchanged since the Bush 2.0 administration, but there’s still something oddly entertaining watching a bunch of Baby Boomers hoon high- and low-powered cars for our entertainment. Season three is underway, and we have a teaser above from the first episode from when Jeremy Clarkson, Richard Hammond, and James May descended upon Detroit last summer. The teaser has Hammond and Clarkson racing stoplight to stoplight in Detroit with May behind the wheel of the 1,000-horsepower Hennessey Exorcist Camaro ZL1 and Clarkson driving the Ford Mustang RTR.

The Exorcist Camaro ZL1 is nothing short of a performance monster thanks to the Texan tuner’s dedication to insane amounts of horsepower. The heavily modified engine produces 1,000 horsepower and 883 pound-feet of torque, hitting 60 miles per hour from a standstill in under three seconds. Top speed is a claimed 217 miles per hour. The sheer absurdity of power is what gives it a significant edge over the Ford Mustang RTR. In the clip, there’s only one instance where Clarkson and his Mustang beat May’s Exorcist Camaro ZL1. 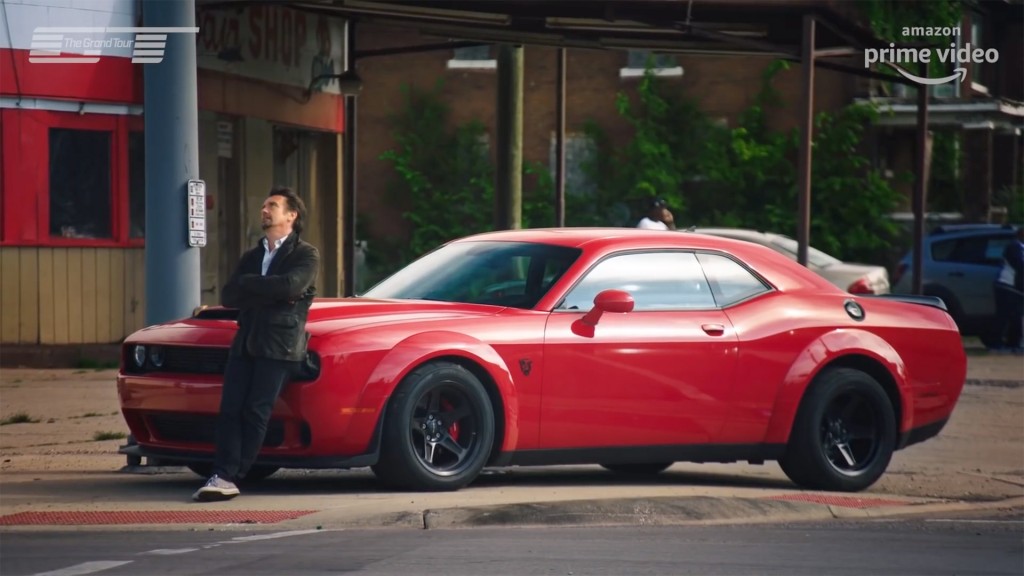 The Mustang RTR is still powerful in its own right—except when it’s compared to the Exorcist Camaro ZL1. The Mustang makes 700 horsepower from its supercharged 5.0-liter V8, which is still enough power to get you in trouble with local five-oh. However, it’s not enough to dominate the Hennessey Camaro and the 1,000 horsepower under the hood.

While Clarkson does everything to heal his bruised ego, racing May again and again, Hammond sits on the sidelines with the 840-horsepower Dodge Challenger SRT Demon. The clip is cute, showing the boys still have prowess behind the wheel of high-powered performance cars. In the race, May loses to, the Exorcist Camaro ZL1’s rear end gets loose, as one would expect in a 1,000-horsepower, rear-wheel-drive, sports car. Either way, it’s still a blast to watch.