If you’re as weird and oddly obsessed with racing as us, you’ve probably looked at a vintage race car and thought to yourself “i’d love to drive one of those on the road.”

Custom car builder Riley Stair, who was previously known for his custom BMWs, had that exact same thought one day. Sitting around deciding what car to invest his time and money into next, Stair got the idea to create a modern day, road-going race car inspired by vintage SCCA Trans Am cars.

The result is this insane, 7 foot wide, 700 hp Pontiac Trans Am, which was recently featured on an episode of The Hoonigan’s web show Build Biology.

Stair built his Trans Am in an outdoor car port next to his parents house, which is frankly incredible when you look at the craftsmanship that went into the build. Stair hand formed the fender flares himself and did the rest of the bodywork by hand as well. The only bodywork he contracted out was the media blasting and the paint. 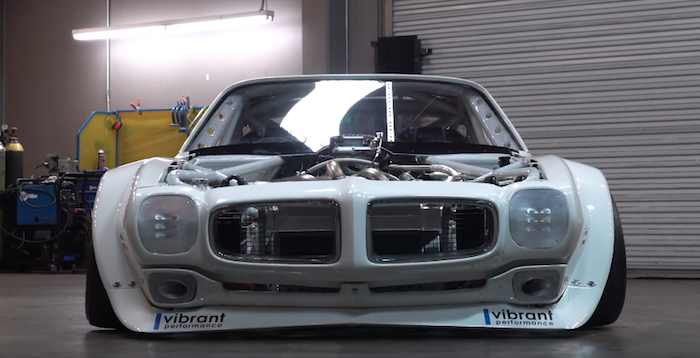 Under the hood sits a naturally aspirated 400 cu. in. (6.5-liter) iron block LSX engine from California-based shop Motor Machine, which features custom 16.25:1 compression pistons and is powered by a Holley Dominator ECU. It spins to 10,000 RPM and is good for up to 1,000 hp when running on methanol and  nitrous. The headers and exhaust, which look like pile of snakes sitting in the engine bay, consist of an equal length 8-1 collector and a 5-inch flat oval exit located underneath the passenger door.

Paired with the engine is T101A 4-speed straight-cut gearbox that was pulled directly from a NASCAR Cup car. The shifter for the gearbox also features a Dale Earnhardt Jr. inscription, so the transmission may have been for one of his Hendrick Motorsports rides.

The modern-day racing inspiration continues with the suspension. Stair’s Trans-Am features a fully independent rear suspension and a redesigned front suspension. He designed his own suspenision geometry front and rear as well, but turned to suppliers like Ohlins, Eibach and Speedway Engineering for the dampers, springs and swaybars.

We could go on and on about Stair’s wild Trans Am, but we’ll just let the man himself explain him build to you in the video embedded above.

Like this story? Check out more of our Pontiac News.