Right now, the 2019 Corvette ZR1 is the pinnacle of Corvette performance—until the mid-engined Corvette debuts, uh, eventually. It packs the supercharged 6.2-liter LT5 V8 engine under the hood paired with either the seven-speed manual or eight-speed automatic gearbox, sending 755 horsepower and 715 pound-feet of torque to its meaty rear wheels. The ZR1’s equally aggressive appearance accentuates the impressive performance stats. The car is long and low, with added ground effects and more carbon fiber. Then there’s the ZTK Performance Package, which adds a mile-high, two-way-adjustable wing. It’s madness.

For as wildly popular as the 2019 Corvette ZR1 is, photos of the convertible equipped with the high wing are scarce. However, an eBay listing for one earlier this month shows the rear-mounted picnic table of a spoiler mounted on one of these drop-top body styles. The package adds more than just the wing, though. Customers also get a tuned suspension and Michelin Pilot Sport Cup 2 tires. 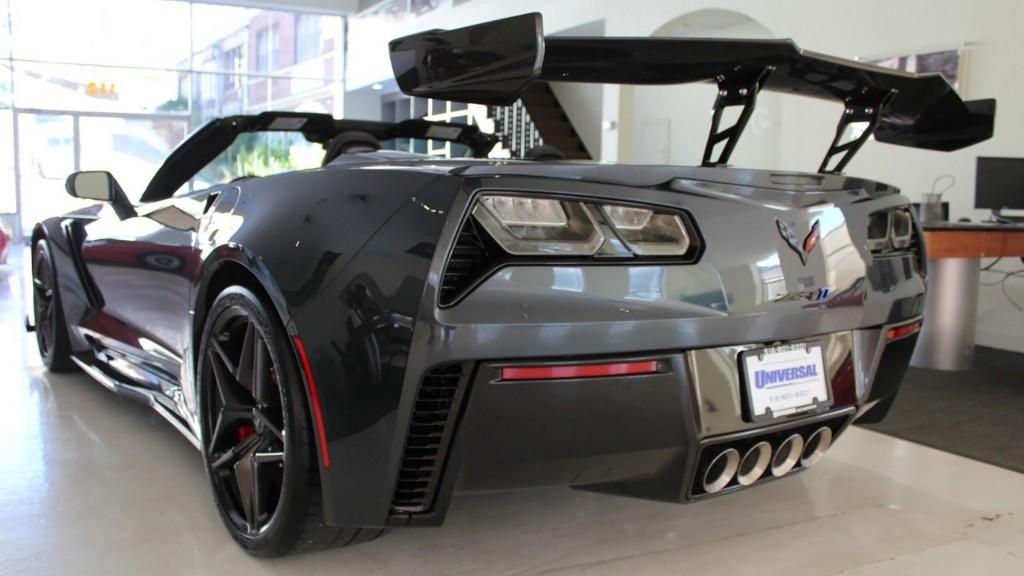 But the wing looks comical, especially on the convertible above. The wing is said to add up 950 pounds of downforce, which helps improve lap times. However, you’ll notice, as did Road & Track, the convertible lacks the proper safety equipment to gain access to a race track. Unless the ZR1’s owner has a track in their backyard, the adjustable carbon fiber wing on the 2019 Corvette ZR1 Convertible designed to add downforce at the track is a tad useless, if not eccentric.

Function aside, the aesthetic choice to add the wing to the drop-top Chevrolet Corvette feels odd. It’s hard not to see the wing as anything but boy racer aesthetic. But as the Corvette people say: people want to have their cake and eat it, too.

In other words: weird flex, but okay!