Crossovers are hot, and every automaker knows it. As GM gets into the mainstream midsize crossover SUV space with the all-new, 2019 Chevy Blazer, Volkswagen is looking to get a piece of growing segment for itself. The German automaker debuted a concept version of its upcoming Blazer rival at the 2018 New York International Auto Show. Called the Volkswagen Atlas Cross Sport concept, here’s a look at how the show car form the world’s largest automaker measures up against the resurrected Blazer.

Much like GM’s Chevrolet, VW is taking its full-size, three-row crossover – the Volkswagen Atlas – and shrinking it to become a smaller, two-row model for the Atlas Cross Sport concept. Both models ride on VW’s highly-modular MQB vehicle matrix, which is defined by a transverse engine placement driving the front wheels.

The strategy to shrink a full-size CUV to a mid-sizer is identical to that undertaken by Honda with its 2019 Passport, as well as by Hyundai for the 2019 Santa Fe, itself a smaller version of the upcoming Hyundai Palisade.

The Volkswagen Atlas Cross Sport measures in at 190.8 inches long, 68.3 inches tall and 79.9 inches wide. While it may be 7.5 inches shorter than the Atlas, it does retain the same wheelbase. The concept rides on a set of glossy, 22-inch aluminum-alloy wheels wrapped in 285/40 tires. Overall, the exterior design is sleek, and the flared wheel arches look rather menacing.

The concept features an illuminated two-bar grille, a notable departure from the three-bar unit making its way across most of the Volkswagen vehicle lineup. LED headlights, DRLs, and taillights are present and accounted for. The D-pillar has a rather unique, forward-leaning shape.

VW says that the roof spoiler with black side fins is another distinctive element of this concept, but we must note that various crossovers from GM and Chevy have had this design element.

The production-intent model will likely tone down the front and rear ends, as well as the wheel flares and wheels. 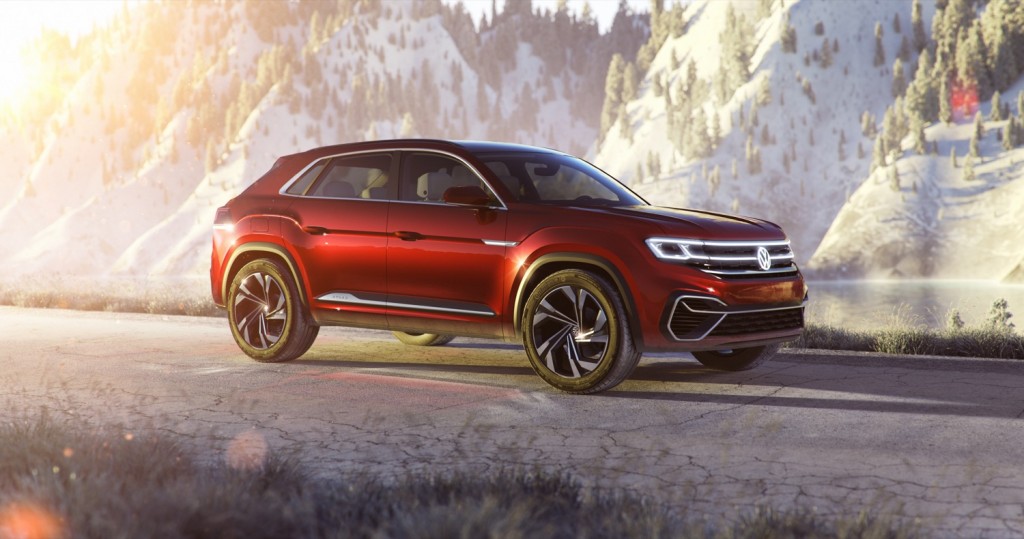 According to Volkswagen, the Atlas Cross Sport concept could also feature a mild hybrid powertrain with the same V6 engine and electric motors, but with a smaller 2.0 kWh battery. This model would deliver 310 horsepower and accelerate to 60 mph in 6.5 seconds.

The Atlas Cross Sport interior is based on the regular Atlas model, although with a few concept-specific features. The show car features a new generation gauge cluster with a 10.1-inch screen seamlessly integrated where traditional gauges would reside. The touchscreen features gesture control and proximity sensors. In addition, the graphic layout of the gauges changes depending on which driving mode is selected.

The interior also features a 12.3-inch, high-resolution Volkswagen Digital Cockpit that can be reconfigured to show driving information, navigation and assistance functions, when necessary. The touchscreen is also used for climate settings and to control the panoramic glass sunroof, matching sunshade, and interior lights. 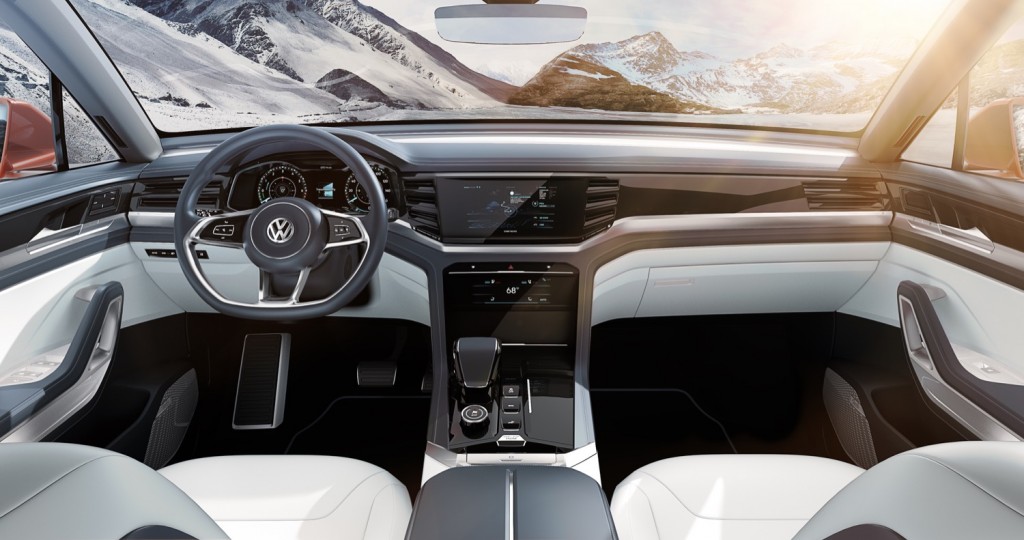 Below the infotainment system and Digital Cockpit is a newly-designed horizontal trim strip made of brushed aluminum. It runs the entire width of the cabin.

To the left of the center console is the selector lever for the 6-speed DSG (dual-clutch) automatic transmission, which has shift-by-wire functionality.

Production of the new five-seater Volkswagen Atlas will begin in Chattanooga, Tennessee in 2019. The model will go on sale as a 2020 model year vehicle.

The Volkswagen Atlas Cross Sport is expected to reach production over the next 18-24 months. It will take on other mainstream mid-size crossover SUVs, including GM’s Chevrolet Blazer and GMC Acadia, Ford Edge, Honda Passport, Nissan Murano, Jeep Grand Cherokee, and Dodge Journey.