News about the Toyota Supra has ricocheted around the internet for years. In January 2014 at the North American International Auto Show, Toyota unveiled the Toyota FT-1 concept—a radical sports car design that had the rumor mill swirling about a Supra successor. Fast forward a few years, after several FT-1 appearances around the world, and Toyota finally confirmed it was working on a new Supra. The internet rejoiced. We’re less than a month from its official unveiling at the NAIAS, and we have our first glimpse of the new Toyota Supra above from SupraMKV.com—and damn does it look good even if the silver paint doesn’t do the design justice.

The photo doesn’t show much other than the front of the car; however, when you compare it to the FT-1 concept, the differences are significant, yet the overall styling stays true to the concept’s original design. We can see from the new image the front-end design is toned down. Concept cars have a habit of over exaggerating certain design elements like thin-slit headlights, massive air intakes, and sharp creases. The FT-1 is no different. However, it looks like the Supra kept many of those elements while toning them down for production. The headlights are similar in design with the lower intakes less pronounced. Even the intakes on the side of the front fascia remain, though they are nothing like what they are on the concept. 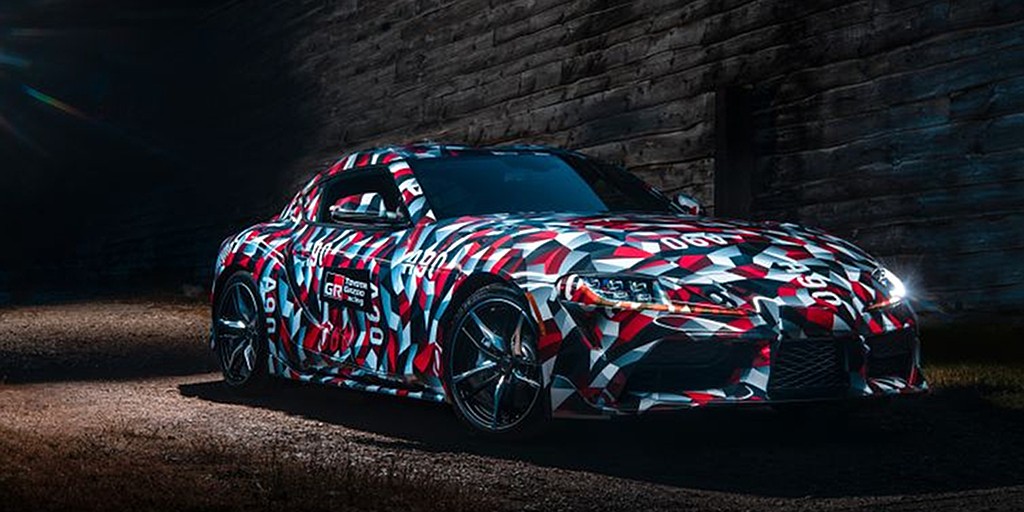 The nose is of the car is more squished, too, with the hood much more subdued on the final product. The hood looks longer on the concept, but that could be a trick of the light and the angle of the photo. We can also see the concept’s double-bubble roof design carries over as well, which is neat.

As exciting as the photo is above, this isn’t the first time we’ve seen the vehicle. During the Goodwood Festival of Speed, Toyota showed off a heavily camouflaged model and announced an inline-six engine would lie under the hood. Toyota’s Gazoo Racing performance division is working on a high-performance version.

Details are still scarce. However, we won’t have to wait long for the full rundown. With the debut just weeks away, we’ll soon know just how potent the new Supra will be and how much of a threat it’ll be to the Chevrolet Camaro. Both are two-door sports cars, and both will offer four cylinder and six cylinder engines. Both have loyal followings. However, it’s unlikely the Toyota Supra would ever offer a V8 under the hood, making it a close competitor to the awesome 2019 Chevy Camaro SS. We’ll need performance numbers to compare the two, which we hope to have by the 2019 Detroit Auto Show a month from now.