American automakers in the 1950s and 60s operated on caffeine and competition. Post-war America was ripe with growth, allowing hundreds of thousands of returning GIs and those employed by the U.S. war machine to wiggle their way up to middle-class status. With that added wealth came a host of exclusive, unique, and rare automobiles as companies such as General Motors experimented with special performance packages, new technologies, and unique trims. One car to come out of GM in the early 1960s was the ultra-rare 1963 Chevrolet Corvette Z06/N03.

There are several reasons why people covet this model. General Motors limited production to just 199 units, according to AutoClassics. GM scrapped its factory-backed racing program and with it ended production of the Z06 and N03 packages. The Z06 package added a host of performance upgrades including a four-speed manual gearbox, Rochester fuel-injected small block V8, a 3.70 Positraction rear end, upgraded racing brakes, and a more robust suspension setup. 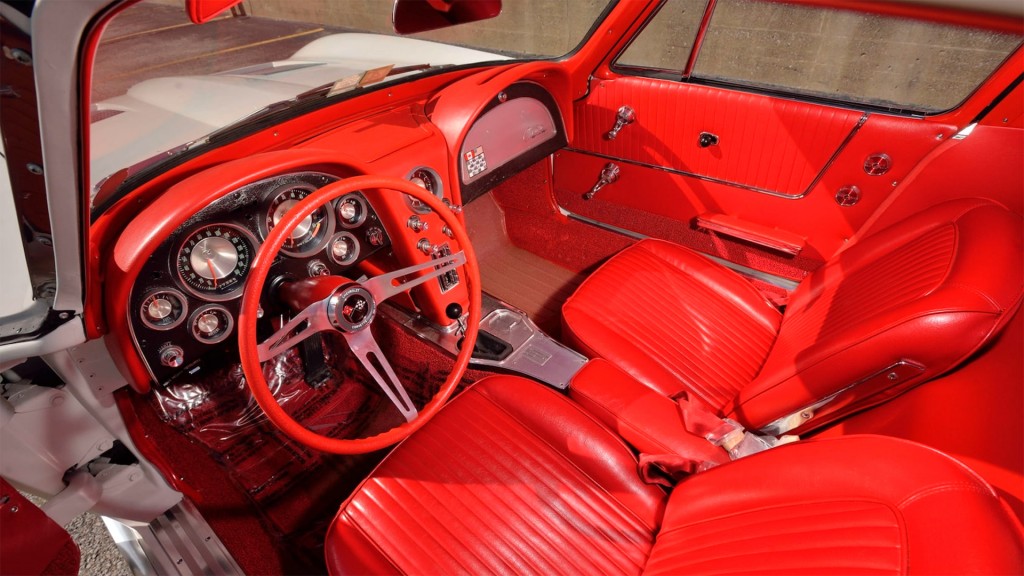 But there’s more that makes this already rare 1963 Chevrolet Corvette more so—the RPO N03 package that added a massive 36-gallon fuel tank. It’s just one of 63 cars equipped with the larger fuel tank, which likely explains its $550,000 – $650,000 estimated value when it rolls across the Mecum Auctions block next month at the Kissimmee event, January 3-13, 2019.

It has the correct factory color combination—white exterior and red interior—with steel wheels. The 1963 Chevrolet Corvette looks gorgeous inside and out, and one lucky auction attendee will become the new owner of not only the car, but its documents, too, which include a dealer invoice, deposit check, maintenance records, and more.