In late 1992, Nigel Mansell found himself in a unique and rather unfortunate scenario. He was the Formula 1 World Champion, but had been left without a ride for the following season.

That’s not to say that Mansell wasn’t at least partially to blame for the problem. The British driver had a falling out with his team, Williams, when they agreed to sign Alain Prost for the 1993 season. Mansell and Prost had an intense rivalry during and after their season spent driving for Ferrari, so naturally, Mansell was upset that he would once again be paired with the Frenchman. Williams eventually decided Mansell wasn’t worth the high salary he had demanded and elected to pair Prost with Damon Hill for the following year.

Mansell left F1 as the reigning World Champion and headed west to race in the CART IndyCar series with Newman-Haas. He turned his first wheel in IndyCar machinery during a pre-season test at Firebird Raceway in Arizona – a small, 1.6-mile road course near Phoenix. Mansell, unfamiliar with the little known circuit, wanted to do some exploratory laps to learn the layout before hopping in the high horsepower IndyCar. He decided his rental car, a white 1992 Cadillac DeVille, was as good of car as any to learn the track, so he took it out for a few laps. 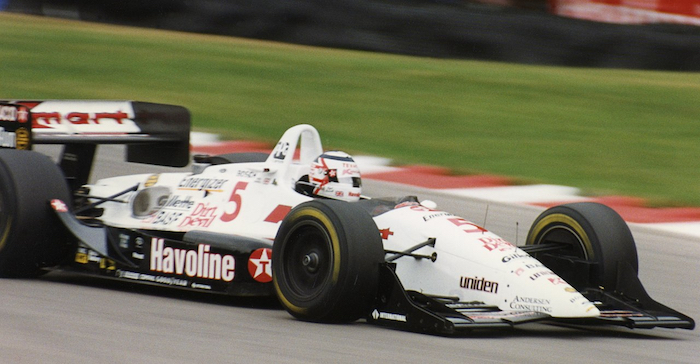 A video from that day shows Mansell not just doing some recon laps, but wheeling the DeVille so hard its tires are squealing. It’s absolutely hilarious to watch Mansell, known for his aggressive driving style, toss the floaty American luxury yacht into a corner with its suspension fully loaded and its tires squealing in anguish. The video also features some footage of Mansell testing out the Newman-Haas Lola, too.

Mansell ended up winning the CART championship in 1993, becoming the only person to simultaneously hold both F1 and IndyCar championships at the same time.

Check out the video of Mansell taking the Cadillac out for some high-speed recon laps above.