Shares of General Motors gained $1.15 or 3.55 percent on Wednesday, December 26th, 2018 – significant movement for the automaker that has seen the value of its shares slide over the past few weeks.

The GM stock rally follows a massive rally on Wednesday, which marked the biggest post-Christmas rally for U.S. stocks ever. The day results represented the Dow Jones Industrial Average’s largest single-day point gain in history, jumping 1,086.25 points or 4.98 percent, to close at 22,878.45. The gains also marked the biggest upside move for the Dow (on a percentage basis) since March 2009, when it rose 5.8 percentage points. 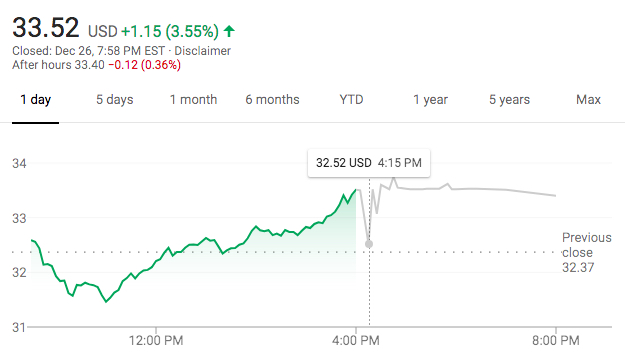 However, GM stock saw a very strong dip in after-hours trading, bringing its value to $32.52 per share at around 4:15 pm. The dip almost erased the day’s gains. Fortunately, it was quickly followed by a return to the mid-$33 per share mark roughly an hour later.

Despite this post-Christmas rally, GM shares continue to trade at roughly the same value as the $33 per share figure of the “New GM’s” Initial Public Offering (IPO) in November 2010 on the NYSE. The automaker has been doing a significant amount to increase its share price, exiting unprofitable markets, divesting loss-making divisions, making adjustments to its business model in order to prioritize profit over market share, while investing heavily into new-age mobility ventures such as electric and autonomous vehicle technologies.