The IMSA ‘United SportsCar Championship’ was formed when ALMS and GrandAm merged for the 2014 racing season and for racing fans, the result has been (so far) positive, with the IMSA-sanctioned series producing strong racing and attracting large fields of cars across its different classes.

Today we’re going to look back on the past, though, at the Chevrolet C6 Corvette GrandAm car. The C6-based race car contested the GrandAm Series from 2006 onward and stayed true to the Corvette formula with its mostly stock LS6 motor and manual transmission. The Grand Am Corvette wasn’t quite as technologically advanced as the Corvette C6.R of Corvette Racing that was racing in ALMS at the same time, but the C6 Grand Am was still one mean sounding and great looking race car, if you ask us. 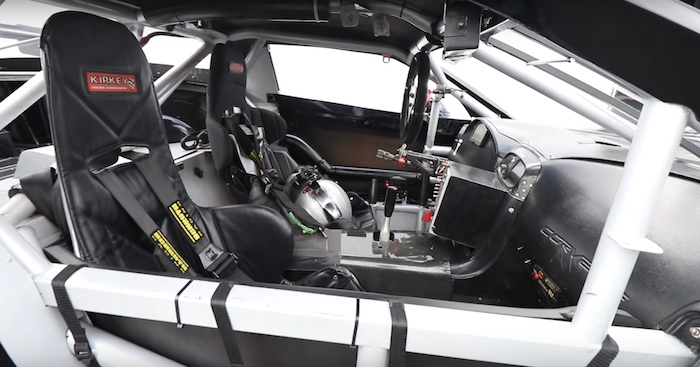 Automotive reviews YouTube channel Speed Academy recently sampled a C6 Corvette GrandAm on track at Toronto Motorsports Park in Cayuga, Ontario. Their rundown of the V8 race car includes a short tour of the exterior and interior along with some onboard driving footage. The speed of the GrandAm car is on full display on the rather small and tight Canadian circuit. The cold tires and cold outside temperatures also make the car a handful to drive, with the driver searching for the grip when he attempts to accelerate out of corners.

Speed Academy laps all of the cars it tests around the same circuit and times its best laps. Not surprisingly, this dedicated race machine was the fastest vehicle the YouTube channel has tested to date. We’d be curious to see how much faster the C6.R would lap the same circuit. Perhaps Speed Academy can get in touch with General Motors for a comparison?