Once upon a time, Cadillac had a reputation for its smooth, refined and powerful V-type engines.

The automaker introduced its first V-type engine in 1915, when it debuted its 5.1-liter V8 engine. This engine, which was the first mass produced V8 ever, produced about 70 hp and was developed by Cadillac’s chief engineer D’Orsay McCall White. The Scottish-born engineer emigrated to the United States to work for Cadillac after serving as the chief engineer for All British Motor Car Co. of Glasgow. He went on to work for Nash after developing the Cadillac V8 and also helped develop the V12 Liberty Aircraft engine, which powered various tanks and aircraft in World War I and World War II.

Cadillac sold 13,000 V8 cars in the first model year, with the eight-cylinder V-type engine layout quickly becoming the automaker’s mainstay motor. It refined the engine in 1923, introducing a 90-degree version with a split crankshaft, which produced 83.5 hp. It kept refining the V8 engine over the years and in 1928, it paired its newly updated V8 engine with the first-ever synchromesh manual transmission – a technology that General Motors pioneered. 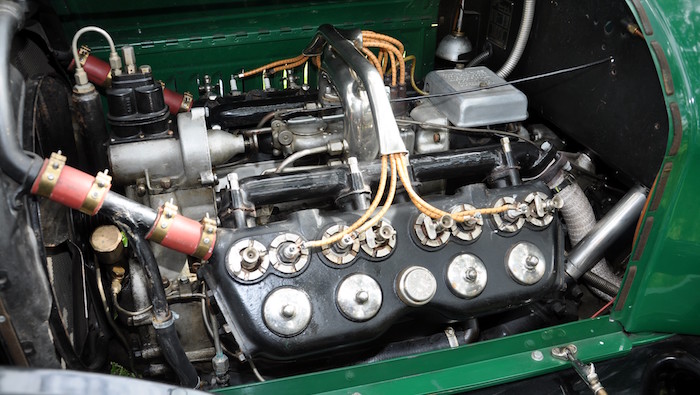 The innovation didn’t stop at V8s and synchromesh transmissions. In 1930, the automaker introduced its V16 engine, designed my Michigan native Owen Nacker. The V16 was born out of GM’s desire to create an engine that was both more powerful and smoother than anything else on sale, with the automaker introducing it in the range-topping Series 452. It had a narrow 45-degree V angle and a displacement of 7.4-liters and set Cadillac apart from the competition. Not surprisingly, sales of the V16 Cadillacs were insignificant and GM lost money on every one it sold.

The V16 found its way into various Cadillac models over its 10 years of production before GM killed it off in 1940.

Cadillac also introduced a V12 shortly after the V16. The V12 was also developed by Nacker and shared many components and design similarities with the sixteen cylinder. The V12, with its lower price and similar driving characteristics, vastly outsold the V16. But neither of the engines stayed in production for very long, with the V12 being axed in 1937.

Cadillac says the adoption of the V-type engine was a defining moment for the brand “that brought about a steep change in performance” that has continued to guide and shape, its engineering and design to this day.

The automaker may not have a V12 or V16 in production today, but it recently rolled out its new twin-turbocharged Blackwing 4.2-liter DOHC V8 engine, which makes 550 hp and will appear in the forthcoming CT6-V. While not as groundbreaking as its other powertrains, this DOHC engine is intended to represent a step forward for GM in the modern era.