The Pontiac Aztek is a car people love to hate. At the time, General Motors and Pontiac went all-in on the crossover. Many within the company believed the controversial crossover would be nothing short of a sales success. But perception and reality clashed just months after the car hit the market. Sales for the Aztek were abysmal, never reaching 75,000 units a year—a goal for the crossover. Sales barely cracked 27,000 a year.

At the time, GM was trying to be innovative. We were ushering in a new millennium and flying cars were, for some reason, conspicuously absent. With flying cars off the table, GM wanted to be a pioneer of innovation, which inadvertently led to just about any radically designed idea to find its way into the Aztek.

For as much hate as the Aztek gets, it had several innovative ideas—even if their execution was staunch 90s GM. Some standout features included a center console that doubles as a cooler, removable seat pockets, onboard air compressor (actually neat), and a removable rear cargo tray for… reasons. 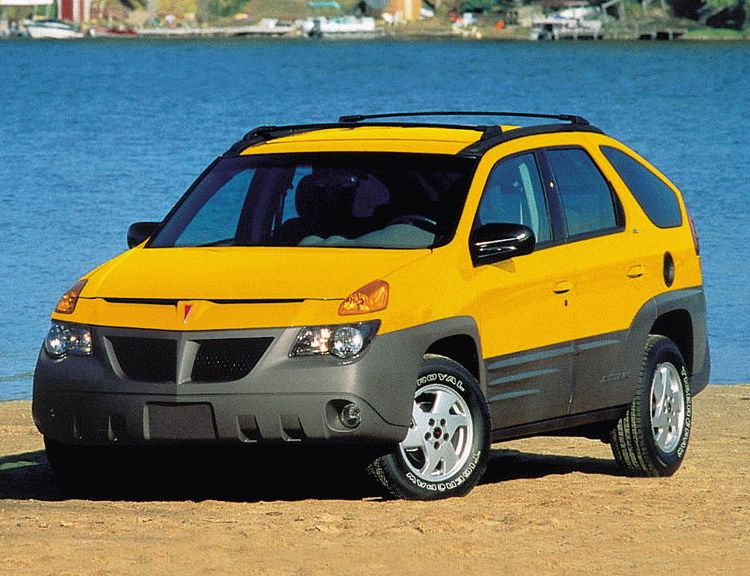 It’s like GM designers wanted to pack as many features into the Aztek to help it sell; however, they didn’t stop to ask “why”—a vital question that could have hammered out some of the crossover’s quirkier features. Corporate bean counters, looking to keep costs under control, also hindered many of the features’ execution. Take the engine as an example. GM’s splashy new crossover with its bold styling and litany of unique features had a very corporate engine—3.4-liter LA1 V6 that debuted in 1996 with the Chevrolet Lumina APV.

But the Aztek wasn’t long for this world. After three years of consistent sales, there was a sharp decline. Production ended in August 2005. For five years, the Aztek was the poster child of a bad car in the early 2000s. Automotive journalists and the car-buying public lamented it for its awkward, pubescent styling and lackluster driving characteristics. However, today, in our pseudo-hipster culture where everything old is cool again, the Aztek is finding a second life as new people fall in love.

It’s all very ironic now, considering the market shift to crossovers. Truth is, the Aztek was simply ahead of its time, if not underfunded.