If you look at the automotive industry, you see automakers raking in profits. However, General Motors and others are trying to position themselves before the market sours, which it almost always does after years of booming growth. The auto industry is cyclical, and everybody seems to recognize that. There’s a market contraction coming, and General Motors, along with its competitors are racing to position themselves to survive the storm. That’s why GM is offering 18,000 salaried employees voluntary buyouts by the end of the year.

“Our structural costs are not aligned with the market realities nor the transformational priorities ahead,” CEO Mary Barra wrote employees in a memo on October 31, according to The Detroit News. “Profitability is only part of what’s required for our transformation. To achieve what this company is truly capable of—and to win—we need to be even more agile and faster to market. And we need to do all of that against a backdrop where those outside our company are skeptical of our ability to manage through an eventual downturn in the economy—skepticism we see in our stock price, which has recently been trading below our initial public offering price.” 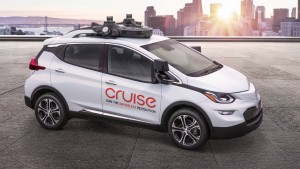 The company’s restructuring and transformation is about more than saving money. The automaker is also focusing on new technologies such as vehicle electrification and self-driving cars. There’s the Chevy Bolt, which could be the company’s autonomous vehicle platform. GM has a stake in Lyft while it acquired Cruise Automation to help with its autonomous vehicle R&D. The Detroit Automaker also inked a partnership with Honda for electric vehicles.

This long-term thinking for the company stems from what happened nearly a decade ago—GM’s historic bankruptcy filing and emergence from financial uncertainty. The bad habits of GM are said to have died then. No longer does the company want to look at growth opportunities in traditional automotive spaces. Before, GM expanded in Eastern Europe, China, and India, according to the report, in the pursuit of scale and profits. However, even those traditional growth avenues carry uncertainties the automaker never wants to experience again.

Barra’s wet blanket of an announcement came the same day as GM posted stronger-than-expected third-quarter earnings. That right there shows how today’s General Motors is different from the one post-bankruptcy. The company doesn’t want to become complacent again, which was one of the factors in the company’s financial woes a decade ago. We’ll have to wait and see if GM’s radical restructuring proves effective this time.