Craigslist is a treasure trove of interesting rides. You can find sweet deals and steals if you look hard enough. Sometimes, though, you discover something so dirt cheap you can’t help but buy it in hopes of turning it into something spectacular. Detroit Speed, wanting to showcase their third-generation GM F-Body suspension and body parts and accessories, found a rough-looking 1987 Chevy Camaro on Craigslist for $500 and turned it into a track-ready monster.

The video shows the car going from an ugly duckling with potential to a bright blue bastard that sounds more race car than road car. The video—a lengthy one at over 15 minutes—chronicles much of the car’s restoration, which is extensive. The car is taken down to the bare metal before being put back together again. 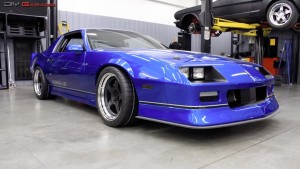 The Chevy Camaro is meticulous both inside and out, showing off some of the exquisite craftsmanship skills of those at Detroit Speed. The blue look stunning, and the race-ready interior with its switches, dials, roll cage, and racing seats look menacing.

From the outside, the Detroit Speed Camaro—aptly titled the Chevy Camaro DSE-Z (Detroit Speed Equipped)—looks like a well-restored road car. However, look inside or peek under the hood and you’ll see a car that blurs the line between open-road driving and decimating the competition at the track. With enough money and resources, any cheap Craigslist find can go from looking like a winter beater to a race car with ease.