There is no shortage of unique, one-off creations on the roads today. Anyone with an idea, resources, and the money can make just about anything into a street-legal road car. However, that doesn’t mean one should. But who are we to judge the taste of others? This limo-like plane is unabashedly loud, but underneath the Cessna 421B exterior is a GMC Sierra 2500. Yup, this is a GMC Sierra plane limo.

According to the eBay ad, the aircraft appeared in the Black Panther motion picture before being converted into a plane limo, which seems like an odd career for a movie prop. What’s crazy is that this kit is street legal. It comes equipped with headlights, brake lights, taillights, turn signals, a backup camera, and side mirrors. Underneath the exterior likely lies a standard GMC Sierra limo conversion, which is what helps make it a street legal vehicle. It seats six, with reclining bucket seats, hardwood floors, and “cold A/C.” The dash looks like that of a stock GMC Sierra. 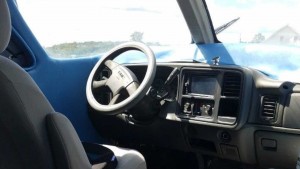 The GMC Sierra plane limo is massive, measuring 32 feet long. It’d be interesting to watch this navigate a parking lot because it probably won’t even be able to navigate a McDonald’s drive-thru. The tail sits 12 feet high, which makes late-night runs for nuggets and fries with a bachelorette party darn near impossible. One of the creation’s most striking features is the front propeller sticking out of the front grille. It sits on ball bearings that allow it to spin freely when it’s being driven.

There’s just over one day left for the auction, which currently has 15 bids – with the current bid sitting at $10,000. The reserve has not been met. If it’s any consolation, the seller has a 100 percent positive rating. You may not like this Crazy GMC Sierra plane limo, but it would be an eye-catching vehicle to see on the road.